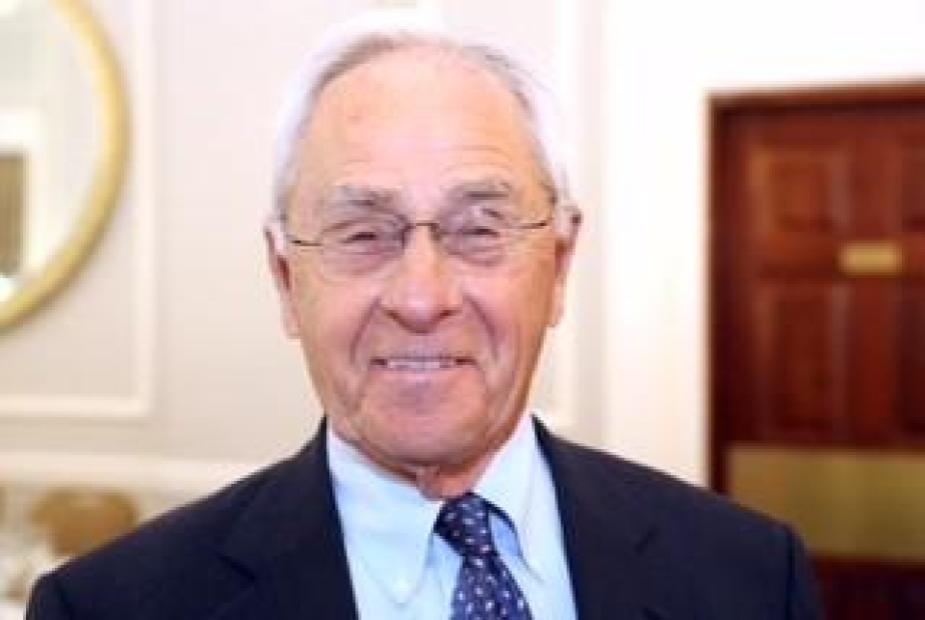 Gordon Hall III, of Marblehead, passed away peacefully October 9, surrounded by loved ones. He was 92. He will be deeply missed by his loving wife, Carolyn “Taffy” Knowlton Hall; sons Gordon R. (Linda), David D. (Lisa Dorval), and Maxwell B. (Alison); stepdaughter, Cally Bray (Brad), and stepson, Matt Scullin (Deema); first wife, Frances; sister, Sally Ann Wood, and brother, Ayres Hall (Peggy); grandchildren Mackenzie, Jacob, Kate, Ella, Emmett, and Natalie; step grandchildren Emma, Ella, and Maddie; and many cousins, nieces, and nephews. He was predeceased by his son Samuel P. He also will be lovingly remembered by the devoted friends, both lifelong and recent, whose lives he touched with his charm and generosity.

Born in Brookline to Gordon and Marguerite (Ayres) Hall, he attended Brookline Public Schools and The Rivers School, graduated from Deerfield Academy and Amherst College, and attended the Yale School of Forestry. He began his long career in real estate as a commercial broker for RM Bradley & Co. in Boston, rising to senior vice president and director there before becoming an independent real estate investor. Two of his sons joined him and over time they have become well established as real estate investors and developers.

In addition to accumulating a large group of investment properties with his sons, he was a consultant to the Boston Redevelopment Authority on the Quincy Market/Faneuil Hall restoration in the 1960s as well as on the restoration of Newburyport’s downtown, two projects that are examples of the then-new concept of restoring and converting historic commercial buildings. Gordon was an ardent conservationist, influenced first by his father and then during his college years as a wilderness trip leader at the Chewonki school and camp in Wiscasset, Maine. He loved to spend time outdoors fly-fishing, skiing, and canoeing the Allagash and Penobscot rivers with family and friends. He also excelled as a competitive sailor, leading his crew on Katabatic, which was “the boat to beat” in New England for over two decades. He and his wife enjoyed yearly sails along the Maine coast and summers at their camp in the North Maine Woods. His passion for nature preservation led to his dedicated service as a trustee of the Conservation Law Foundation, Forest Society of Maine, Appalachian Mountain Club, and Chewonki Foundation.

During his life Gordon also served as a director of the Mutual Bank of Boston; Thermal Circuits, Inc.; Society for the Preservation of New England Antiquities; and The Enterprise Center of Salem State University; and gave philanthropic support to many other organizations including the Stephen Phillips Memorial Scholarship Fund and the Mass General Brigham Salem Hospital. He was chair of the Amherst College Alumni Fund and partnered with the College on developing a large piece of land in Amherst. From 1996 to 2004 he was president and chair of the Berkshire Choral Festival, which gives 1,200 amateur singers week-long experiences performing classical works in various venues each summer. He published two books: Satan in the Pulpit, a history of the Phillips family and the founding of the Academies in Andover and Exeter; and, with Amherst College friend Don MacNaughton, Lord Jeffery Amherst, a history of his tour of duty in the colonies just prior to the American Revolution.

Please visit eustisandcornellfuneralhome.com for updated information about Gordon’s memorial service, to be held November 12 at 10:30 a.m. at Old North Church, Marblehead (livestream available at https://www.onchurch.org/), followed by a reception at Eastern Yacht Club. Donations will be gratefully received by the organizations to which Gordon gave so much of himself: Conservation Law Foundation, Chewonki Foundation, Appalachian Mountain Club, and Forest Society of Maine.   Fond memories and expressions of sympathy may be shared at eustisandcornellfuneralhome.com for the Hall family.