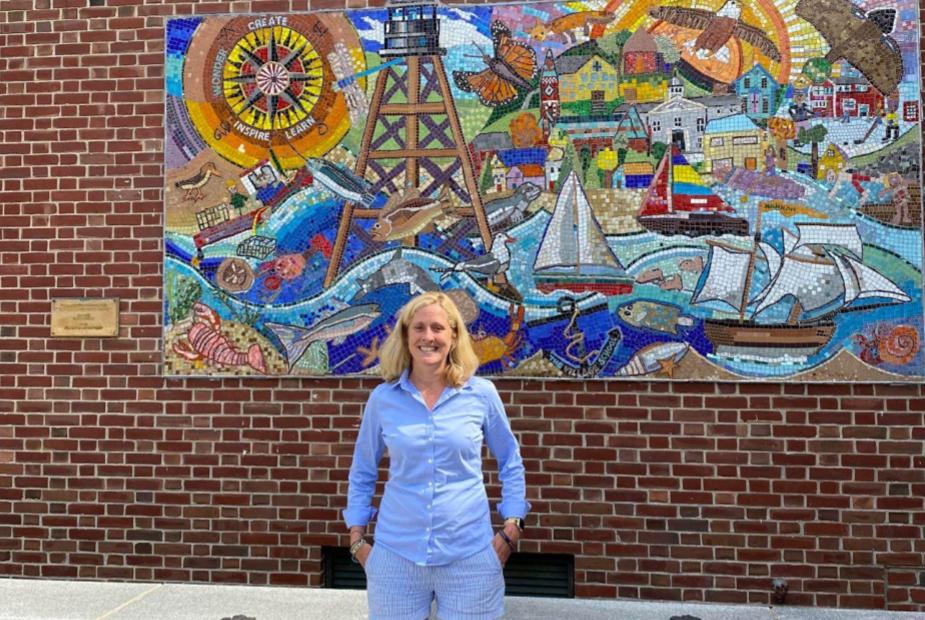 Murphy grew up in Manchester, Connecticut, and was the oldest of six children. She has two brothers and three sisters. Her father owned a grocery store, and her mother stayed home to take care of the children. She recalls feeling “very lucky growing up; I had a supportive family. Growing up [with five siblings] was tricky, but they’re now my best friends,” she says.

Murphy has wanted to be a teacher since she was very young, often enjoying playing school more than school itself, possibly foreshadowing her future role as an administrator. Despite her tendency towards education, Murphy ended up studying psychology at Saint Michael’s College, where she received her bachelor’s degree. She went on to become a counselor at a psychiatric hospital. While there, she was offered a position in the hospital’s classroom and found her true passion for education. As a result, she returned to school, earning her Master of Education in school counseling from the University of Massachusetts Boston. Murphy later became a special education tutor in Wellesley, and ultimately found her way to Marblehead.

Murphy lives in Lynn with her husband and their two dogs, an English Mastiff and a Boston Terrier, who are “complete opposites, but best friends.” Every morning, she makes the 15 minute commute to the Village School, where she has been on the staff since 2004. She was originally a guidance counselor working alongside Jeffrey Newsome, a friendly and comforting presence at the school to this day. She joined the ranks of the administration as the assistant principal under principal  Theresa McGuinness, who ended up leaving just one year later. Murphy was named the interim principal and later offered the position on a permanent basis. McGuinness was and remains a role model for Murphy. “She taught me everything I know,” Murphy said. “I still ask her questions all the time.”

In discussing the grades that attend Village School, Murphy says, “I love four, five, and six. It’s not too young, but it’s not too much like middle school.” She recalls thinking, “Wow! That’s a perfect age group” when she first heard about the school. Her favorite part of her job is that the kids are always happy to be at school and excited to be learning. Every job has its difficulties, however, and Murphy has found that to be the case particularly when dealing with instances of bullying and students who are upset about various issues. She notes that her experience as a counselor both at and before her time at Village has been very helpful in navigating difficult situations.

As principal, one must oversee both aspects of education: teaching and learning. Murphy makes sure to “always keep the students first” while also ensuring that the teachers feel supported in their efforts. “All of the teachers want the students to be successful,” she says about her staff, explaining that “teachers do a really good job balancing the needs of students at varying levels,” an admittedly difficult situation to manage in the classroom. She also speaks to the fact that her own sixth grade year was very difficult for a variety of different reasons, which motivates her to make sure that the sixth graders are having the best year possible. “I see challenges that students are facing that I recall facing myself,” she says.

The Covid-19 pandemic was challenging for everyone, but educators certainly experienced this difficulty in a unique way. March 13, 2020 was an interesting day for Murphy; not only was this the day that the Marblehead Public Schools closed down, but it was also her dad’s birthday, leading to conflicting emotions. As she navigated the pandemic, she learned to appreciate smiles, seeking out what she came to call the “smiling eyes” that she observed in students wearing masks. She also learned just how important the in-person educational system is.

The pandemic has been a difficult time for Murphy in many ways. She lost family members, and she shares her regret that she did not  spend more time with them before they passed.  “You always regret not spending time with people. You regret not doing something that you know afterwards would have been great,” she says. These losses reminded her of just how important it is to be present in every moment that you spend with your loved ones, and to be as kind to everyone as is possible.

In her admittedly limited free time, Murphy enjoys running and reading. She frequently undertakes six or seven mile runs, listening to crime stories the whole time. This past April, she participated in the Boston Marathon. Reading has been a favorite pastime for her since she was very young. “I’ve always been a reader,” she says. Murphy partakes in the Village summer reading list each year, finding that it is a nice conversation starter and a great way for her to engage with students.

“Being here every day making a difference in this community is pretty awesome,” Murphy says. She entered education to have a positive influence on future generations, and it is safe to say that she has and will continue to leave her mark, enjoying herself all the way. “I’ve grown to love this community, and I’m happy here.”