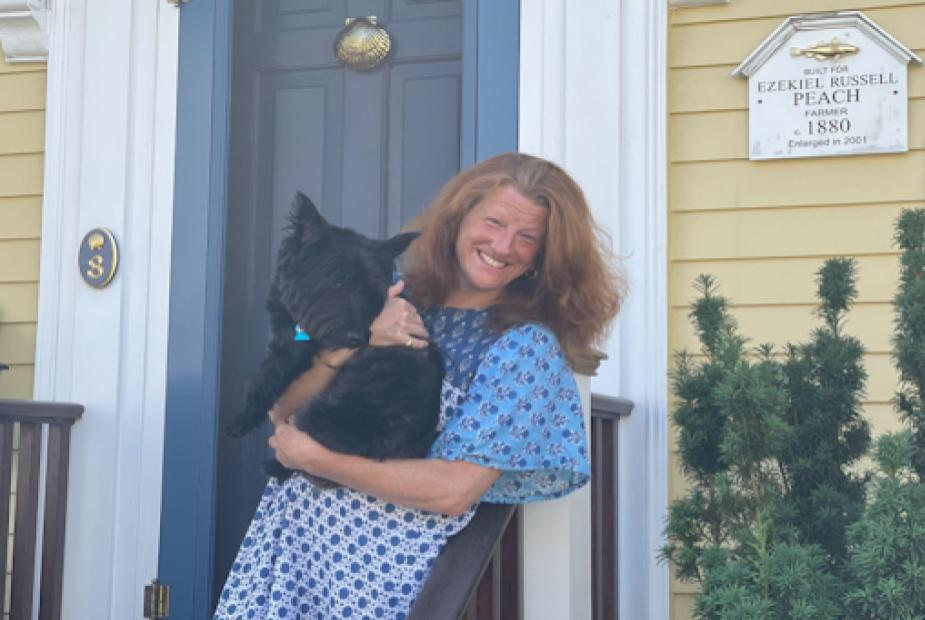 Jenny Armini: This District is “a Microcosm of All That is Great About Massachusetts”

Jenny Armini, 53, has lived in Marblehead for sixteen years. Along with her husband, Michael, Jenny has raised her son–a rising college freshman–and her daughter–a rising high school junior–in a neighborhood near Redd’s Pond, where she considers many of her neighbors long-time friends. “I love this district. It’s a microcosm of all that is great about Massachusetts, with natural beauty, dynamism, [and] economic diversity.” Armini decided to run for office to give back to her district. “This community raised my kids,” she offers, noting that “everyone had a hand in raising them,” including teachers, coaches, camp counselors, doctors, and first responders.

Armini grew up in Brooklyn, New York and the Jersey Shore, coming to Massachusetts to earn an Associate’s Degree in Communications at Endicott College, and then heading off to obtain a Bachelor of Arts in American Government and Politics at the University of Virginia–the place Armini says she began to develop a passion for public service.

Armini’s first government job was on Capitol Hill, where she was hired as a scheduler for New Jersey Republican Jim Saxton. Before long she was afforded the opportunity to work on Israel-related legislation, and she along with a group from Capitol Hill even traveled to Israel, where she recalls the back-to-back experiences of attending a Fourth of July event in the U.S. Ambassador’s home followed the next day by dinner with members of the Palestinian Liberation Organization.

Armini continued her work in government, getting hired as a senior legislative aide to Massachusetts Congressman Peter Torkildsen, a moderate Republican in Newt Gingrich’s Congress. When Torkildsen lost his re-election bid to Democrat John Tierney, Jenny and her husband Michael (Torkildsen’s Communications Director) decided to move to Massachusetts, ultimately laying down roots in Marblehead. Armini’s passion for all things government, politics, and writing led her to enroll in the one-year Mid-Career program at Harvard’s Kennedy School of Government, where she received a Master’s in Public Administration, while also interning at Planned Parenthood.

By the time the September 11, 2001 tragedy unfolded, Armini was working in the halls of the Massachusetts State House, writing speeches for Republican Governor Jane Swift. Her experiences in Swift's office and her work on Capitol Hill taught her that a legislator must understand the pressure points and “exploit them” in a positive way to pass meaningful legislation, while utilizing a skill she contends is one of her strongest–relationship building.

Armini went on to work for several other organizations before she decided to take her speechwriting talents into the freelance realm in 2007 and in 2017 co-founded Elect Blue, a grassroots political group dedicated to electing Democrats. Asked about her obvious political transformation after having spent meaningful chunks of her career working for Republican elected officials, Armini says,“I’ve been a proud Democrat for many years. Getting there was an evolution shaped by two factors: The Republican Party became increasingly radicalized by the far right, and I became increasingly focused on building a healthy, equitable society for my children and other people’s children. There’s simply no space in today’s Republican Party for my progressive values.”

Armini has been campaigning hard since March, and notes that, if elected, she plans not to take any other paid work and will make serving as a legislator her full-time job. In her limited free time she enjoys hanging out with the household resident her family refers to as the favorite child: her Scottie-Westie mix, Wallace. Queen of Queens, a book of poetry by Marblehead resident Jennifer Martelli, is the last book she read, and Annie Hall is Armini’s favorite movie. But free time for such things will be rare over the next six weeks as the as the race’s finish line beckons and campaign obligations take over.

Editor’s Note: The author of this story, Jenn Schaeffner, is on the steering committee of the group PowerUP!, on which another candidate for the 8th Essex District–Terri Tauro–serves. Prior to launching Marblehead Beacon, Schaeffner contributed to Tauro's campaign. Marblehead Beacon co-founder, Lena Robinson, and her family have been close to Jenny Armini and her family for more than 25 years. Robinson’s husband, Dwight Robson, has donated to Armini's campaign.