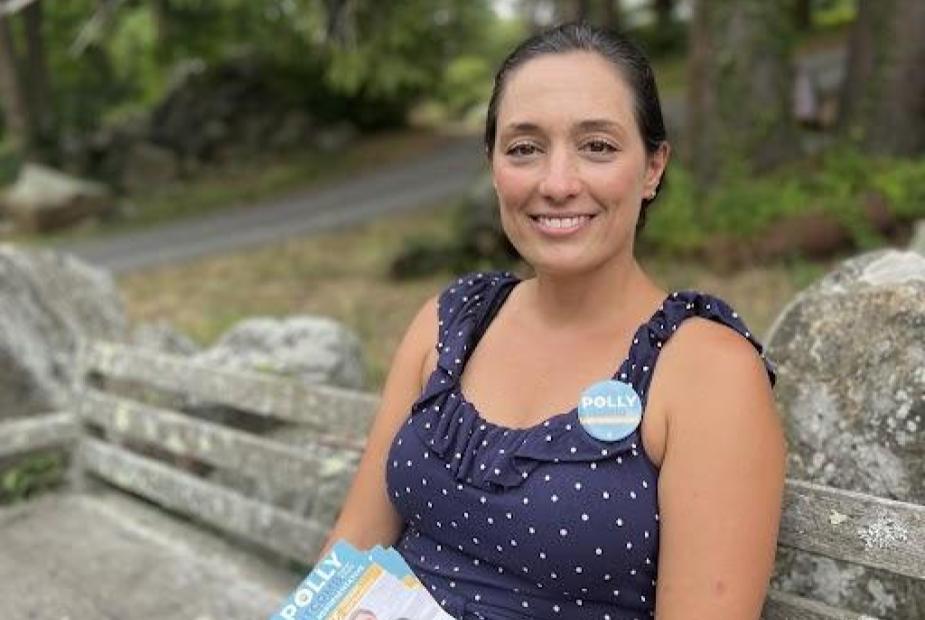 Polly Titcomb: “I Have a Lot of Energy” and “I’m No Shrinking Violet”

“I have a lot of energy,” says Polly Titcomb, 41, who was raised in a large Greek family and hopes to be the next State Representative for the 8th Essex District. With shared custody of her two children–ages eight and ten–and a career as a self employed family-law litigation attorney, Titcomb is busy. She also has devoted countless hours in the past almost decade that she’s lived in Swampscott to civic pursuits on Swampscott’s FinCom and Select Board, and she is now running in the field of six for the seat formerly occupied by Representative Lori Ehrlich.

Titcomb believes that her time in elected office, as well as her legal advocacy for the disenfranchised, make her a strong candidate with a proven record of working on behalf of others. The University of Vermont graduate with a Bachelor of Arts in Philosophy and Environmental Studies went on to receive her law degree from Northeastern University, and says, “I do believe I am the right person for this job.” Should she win the race, Titcomb pledges to give the job her undivided attention, focusing on making her constituents' voices heard, while still maintaining a modest caseload of her legal work with families. Of the state legislator’s salary just north of $70,000 (plus an office-expense stipend of approximately $17,000), she says simply, “I cannot live on it.”

One of the biggest challenges Titcomb says she faces in campaigning is that she must choose between time off from her work as a self-employed lawyer, and time away from her young children, whom she co-parents with her former husband. “Luckily he lives five minutes from my home,” she notes, considering herself lucky to have an involved parenting partner. “God help the person who doesn’t have an active co-parent.” Nevertheless, Titcomb is undeterred by the uphill battle she faces in finding enough hours in the day to campaign and fundraise. Speaking about those who run for political office generally (as opposed to the 8th Essex race specifically), she adds that “it should not be that only married individuals who have a spouse who can provide a cushion, people without children, or people who have already made enough money and can do this as a second career, are the people who can afford to be in office.”

Professional challenges Titcomb has faced in the past include serving as Swampscott Select Board Chair during a period in which she says sometimes she was a lone voice. After some concerns came to light with respect to human resources in the town, for example, she called for an independent analysis of key town functions. All but one of her fellow Select Board members disagreed with her, and the result, Titcomb says, was a perception that I was trying to drive [the Town Manager] out of town,” rather than attempting to “do my job,” and advocate for Swampscott. The motion ultimately “went nowhere.” Titcomb says she was extremely disappointed with the other members and did not shy away from making that known to them. “I’m no shrinking violet,” she says. Nevertheless, after all was said and done, every one of her fellow Select Board members recently endorsed her run for State Representative. This, Titcomb believes, is a testament to her professionalism and the notion that even for those who–at times–disagree with her, there is an understanding that she works with constituents’ best interests in mind and would be an effective state legislator.

Some of what Titcomb accomplished during her years as an elected official, she says, “included creating structures that have longevity, outlast us, and are corruption proof.” She drafted financial guidelines and the code of conduct handbooks for all Swampscott town committees–elected or appointed, something that falls under “best practices” in municipalities, she adds, expecting that such experience will be instrumental in her success on Beacon Hill.

With a packed campaign schedule between now and Primary Day on September 6th, Titcomb does not have much in the way of free time, but when not with her children, she enjoys decompressing with a book or movie. The last book she read was World Without End, by Kenneth Follet, and one of her favorite movies is I Heart Huckabees.

Editor’s Note: The author of this story, Lena Robinson, and her family have been close to one of Titcomb's opponents, Jenny Armini, and her family for more than 25 years. Robinson’s husband, Dwight Robson, has donated to Armini's campaign. Additionally, Marblehead Beacon co-founder Jenn Schaeffner is on the steering committee of the group PowerUP!, on which another candidate for the 8th Essex District–Terri Tauro–serves. Prior to launching Marblehead Beacon, Schaeffner contributed to Tauro's campaign.