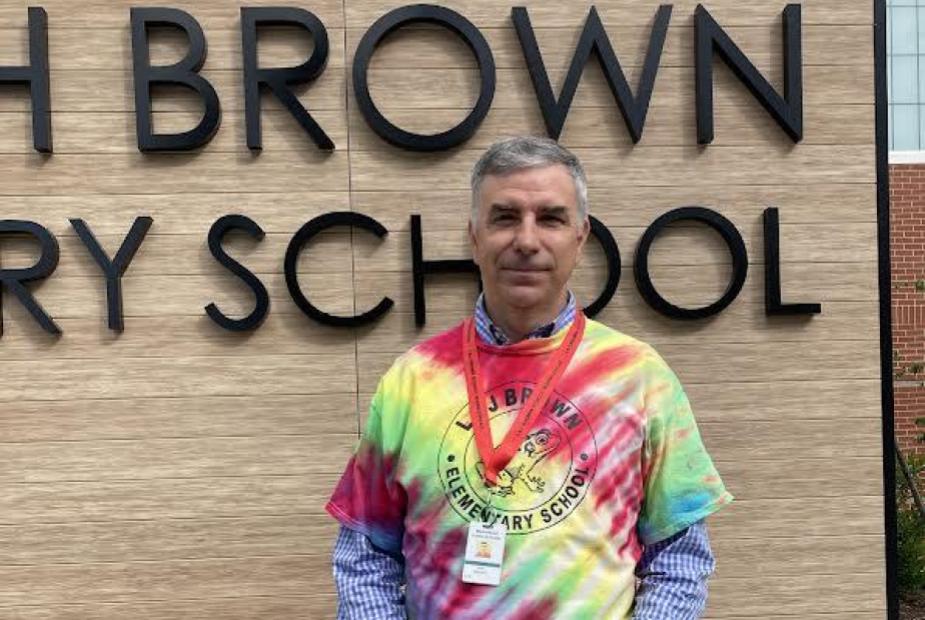 “The staff don’t work for me, I work with them,” is how Principal Sean Satterfield summed up his approach to his role as principal. Satterfield has served as an educator in the Marblehead school system for the past 24 years both as a teacher and, more recently, as a principal. Born and raised in Frederick, Maryland, Satterfield attended Loyola College in Baltimore, where he studied philosophy and English. He received a Master of Education from the same school. As part of his effort to pursue education as a profession, Satterfield received a Doctor of Education from the University of Massachusetts Lowell in 2015. He is currently the principal at the Brown school.

Satterfield moved to the North Shore in the 1990s, and took up a job at the Coffin School in 1998. He mentioned that he’d previously held brief roles both as a middle school teacher and in a high school resource room, but found his passion in elementary education. He pursued teaching as a career path because he had always loved being a student and wanted to experience education from the opposite perspective. About fourth graders and younger students in general, Satterfield noted that “they understand a lot and they’re still very enthusiastic about school” and that “I greatly enjoy teaching this age group. Whenever you walk in it’s always different. The children are always very enthusiastic,” which is why he has remained an educator in that age group over the decades.

Prior to taking on the role of principal, Satterfield taught fourth grade students, which in Marblehead means that he was responsible for education in all of the core subjects. He said that he particularly enjoyed social studies, because of its emphasis on Marblehead history, and science, because of the hands-on kits that were included in the curriculum. As to the older age group, Satterfield said, “very special people work with middle school students,” but that he personally prefers elementary education. He would, however, potentially be interested in teaching graduate-level courses in education to people looking to pursue jobs in the field.

During the past several years, Marblehead has undergone significant changes in its educational system, as three schools–Bell, Gerry, and Coffin–combined to become the Brown school currently under the jurisdiction of Principal Satterfield. Satterfield was involved throughout the entire process, and is now responsible for ensuring that students and staff are well equipped to use the new facility to the best of their ability. He spoke to the fact that the new school has “more staff, more students, [and] more things going on,” which makes his job more complicated, but he also mentioned that having a new school allows for improvements in access to teaching tools including technology, which facilitates improvements in educational standards.

One change that came with the new school, Satterfield noted, was that professional development, or time allotted for teachers to improve their teaching, is now built into the schedule. As those who have been a part of the Marblehead school system might know, professional development used to occur after school, and students were dismissed at noon. In an effort to maximize time in classrooms, particularly in the wake of several tumultuous years during which in-person learning was limited, teachers now have this time built into their schedules once per week, alleviating the need for early dismissals.

Satterfield mentioned that the neighborhood schools that used to form the elementary education sector of Marblehead public schools all had songs that their students learned. He spoke to the fact that this tradition helped to assist in building the type of school culture that he would like to see at the Brown school.

The Covid 19 pandemic has been the defining characteristic of many aspects of life over the past couple of years, and education is no exception. A heavy burden was dropped onto the shoulders of teachers and administrators throughout the pandemic, as the traditional styles of teaching were no longer applicable. Satterfield spoke about the fact that the shift to online and hybrid learning happened to overlap with the conglomeration of the schools, which doubled the stress for the teachers and students who were forced to frequently change their lifestyles to account for educational shifts. He praised the staff across the school system, and noted that they all did their very best to make sure the students had the best education possible. Satterfield said that there are many students at the Brown school who have never experienced a year of education unencumbered by Covid. While this year has been far closer to normal, a mask mandate was in place for the first several months of school.

There was and continues to be work that is required in order to make sure that the students are prepared from a social-emotional standpoint, said Satterfield, particularly following their limited exposure to the outside world over the past couple of years. He has high hopes for these students, however, because “the good thing about elementary students is that they’re very resilient.”

With respect to the broad changes being made to education in recent years, Satterfield pointed out that the prevalence of technology in the classroom has been beneficial to teachers and students alike. MCAS testing–the standardized tests used in Massachusetts–are an example, according to Satterfield, of the improvements brought on by technology, as there is no more need for paper materials, and scores can be transmitted automatically, removing much of the hassle generally associated with standardized tests. He also spoke about his observation that kindergarten and lower grades in general have placed a greater emphasis on academics. Younger students are exposed to language arts and mathematics at much younger ages than was common in past years, noted Satterfield. This change shines light on the varying knowledge base among students, and Satterfield believes that this wide array of knowledge is reflective of the differences in children’s exposure to educational concepts outside of a formal teaching environment.

Satterfield’s goal remains to ensure that every student receives the education to which they are entitled, and that each is given appropriate and fair opportunities. With that in mind, he noted that “just like in the upper grades, if you have children [who] are working at a higher level, you have to constantly make sure that they’re challenged.” He suggested that while leveled education has its place in higher grades where evaluation is rooted more clearly in empiricism, at lower grade levels, it is important to account for the fact that social-emotional growth is also extremely important and cannot as easily be measured in a meaningful way that would lend itself well to leveling.

Principal Satterfield will be leaving the district after 24 years of service to the Marblehead school system. The Marblehead Beacon wishes him the best of luck in his future endeavors.