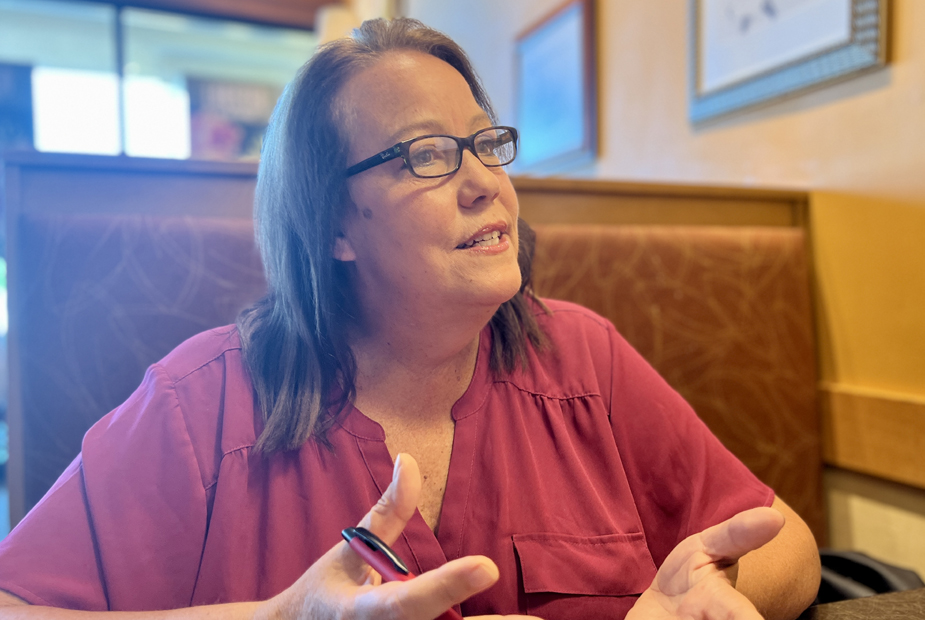 For six years Terri Tauro, 55, mother of two grown daughters, has been the President of the Marblehead Municipal Employees Union (“MMEU”). She points out, however, that her representation of workers began much earlier and with no title, while at her myriad jobs in sales, waitressing, bartending, doing nails, and working at banks. “I’ve always been the unofficial spokesperson when staff had an issue; I would sit down with managers and owners to talk about these matters.”

In the decades since high school, Tauro’s years-long stints working in a diversity of arenas and for local businesses like Three-Cod Tavern, Bliss Salon, and La Belle Femme ultimately led her to pursue the professional role she has currently as Department Administrator with the Marblehead Harbormaster’s Office, as well as her three elected terms as the MMEU President. Her working-class roots and ties remain strong; as recently as last year she went back to Woodman’s of Essex to bartend events.

“This job would be a raise for me,” Tauro says of the approximately $88,000 every starting state legislator receives between salary and office stipend (though many earn substantially more when appointed to certain committees or to fill additional roles). Pledging to treat the role of state representative as a full-time job, Tauro would not do “side hustles” or other jobs “unless Woodman’s calls and they’re desperate,” she says, smiling. “To do this job right you have to do it full time or more than full time.”

The youngest of five children, Tauro grew up in Marblehead public housing–somewhere she has gone to knock on doors during her campaign. “I recall the stigma of living in public housing,” she says, “and kids from the Neck not being allowed to come to my birthday party.” With such memories lingering decades later, Tauro says that she does not want to ignore the interests and voices of those in the district who live as she once did. “It’s why I’m going door-to-door in public housing, and not just to registered voters there.”

Tauro balances a busy campaign schedule with her work for the MMEU and her full-time job with the Harbormaster. In her day job she manages the administrative side of all four harbors–including temporary and permanent mooring assignments–implements the use of new software, and a host of other duties. “You name it, I do it, because the Harbormaster needs to be clear to be on the water.”

Plainly visible throughout Tauro’s website, her campaign literature, and in her conversation with Marblehead Beacon is the role organized labor plays in her candidacy. With a long list of unions and two PACs endorsing her, she is the only one of six candidates with overwhelming support from labor unions, and she counts among her fundraising contributors many fellow union members. Asked about whether she could be viewed as beholden to such special interests by independents and even some Democrats who might see the union support differently, Tauro does not mince her words. “The unions’ special interests are working families. As far as specific unions coming to me and saying, ‘hey, do this,’ that is not how this works, at least not for me. I am going to protect the rights of working families; I am not going to protect the rights of a corrupt union to make money.”

With about six weeks remaining until the September 6th primary, Tauro plans to continue her grassroots campaign at full tilt. To the extent she has made time for leisure in her life, she reports that her favorite movie is Dirty Dancing, and the most recent book she completed was, The Trouble With White Women. One thing that she always finds time for, though, is to walk with her beloved dog. “We couldn’t name her Tom so we named her Giselle,” she says.

Editor’s Note: The author of this story, Lena Robinson, and her family have been close to one of Tauro’s opponents–Jenny Armini–and her family for more than 25 years. Robinson’s husband, Dwight Robson, has donated to Armini's campaign. Marblehead Beacon co-founder Jenn Schaeffner is on the steering committee of the group PowerUP!, on which Terri Tauro serves. Prior to launching Marblehead Beacon, Schaeffner contributed to Tauro's campaign.