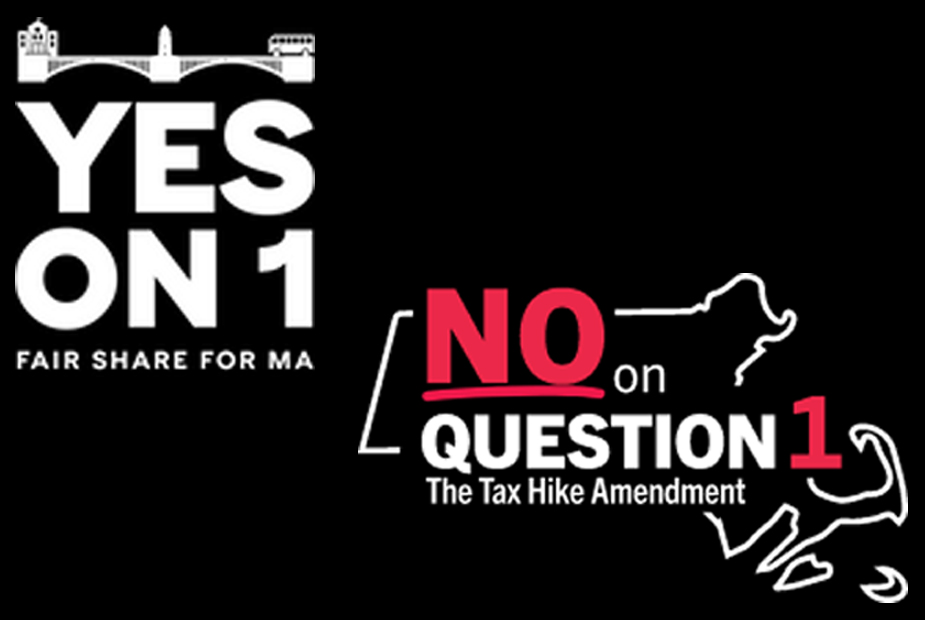 As we get closer to the much-anticipated mid-term election on November 8, 2022, Marblehead Beacon is prepared with comprehensive coverage of issues with specific relevance to Marbleheaders. Stayed tuned for stories about the local races, the ballot questions, and the statewide and national campaigns with the most potential impact.

The first question on the ballot this November is a proposed amendment to the Massachusetts constitution, approval of which would involve the levy of an additional tax of 4 percent on the portion of individual annual income that exceeds $1 million.

Currently, Massachusetts has a flat tax, with all earned income (such as salaries, wages, tips, and commissions) taxed at the rate of 5 percent. Unlike a graduated income tax, in which the rate of taxation increases at higher income brackets, a flat tax means everyone who earns money in Massachusetts currently pays income tax at the same rate. The approval of Question One would rewrite the Massachusetts constitution to allow for two different income brackets in the Commonwealth to be taxed differently, with the higher rate of 9 percent initially kicking in for income over $1 million. This income level would be adjusted annually to reflect cost of living increases, using the same method as is applied for federal income tax brackets.

Massachusetts was actually the first state in the nation to implement a flat tax on income, back in 1917, and it was one of only five states with any type of income tax at that time. When the Massachusetts constitution was ratified in 1780, it did not include any provision for an income tax. Amendment 44, proposed in 1915 and adopted in 1917, allowed for the legislature to “impose and levy a tax on income” so long as it was “levied at a uniform rate throughout the commonwealth upon incomes derived from the same class of property.” At that time, earned income was taxed at a rate of 1.5 percent, with higher rates assessed on income from investments and other sources.

Tax rates in Massachusetts have fluctuated since that time, with the personal income tax rate reaching a high of 6.25 percent in 1990 and falling back to 5.95 percent in 1992. In 2000, an initiative petition appeared on the ballot asking voters to approve a reduction down to 5 percent by 2003. Called the Massachusetts Tax Rate Reduction Initiative, Question 4 was approved by approximately 60 percent of the electorate. In 2002 the state legislature adopted a plan to spread the reduction out over a longer period of time, and the target rate of 5 percent was eventually achieved on January 1, 2020.

A number of attempts to transition from a flat to a graduated income tax in Massachusetts have been voted down over the years, including in 1962, 1968, 1972, 1976, and 1994. In 2015, a group of graduated income tax proponents began the process once again. Though their initial approach was overturned by the courts in 2018, they tried again, and the current proposal was approved by the legislature in joint sessions of the house and senate in both 2019 and 2021, as required for a constitutional amendment to appear on the ballot for approval by voters. A majority vote in favor of Question One on November 8, 2022 would allow this amendment to become law.

Fair Share Massachusetts is leading the Yes on One effort, claiming on their website that Question One “will allow Massachusetts to improve our transportation and public education systems by making the very rich pay their fair share.”

The opposition group, Coalition to Stop the Tax Hike Amendment, disagrees, arguing that the tax increase won’t hit only the wealthy, but would actually affect small business owners, family farmers, homeowners, and retirees. Because one-time earnings, such as a home sale, would count as income, they say, many residents would suddenly find themselves in a tax bracket that is 80 percent higher than it was previously.

Those in favor of Question One argue that the timing is right for this constitutional amendment. “As we recover from COVID,” they write, “we need to make sure our public schools have everything they need for students to thrive….We need to repair our state’s backlog of hundreds of neglected and structurally dangerous bridges, roads, and trains…We need to make our public colleges affordable…We need to increase access to vocational education.”

The No on One group counters that this is actually a bad time for a tax increase. Noting the effects of COVID as well as supply chain issues and inflationary pressures, the Coalition to Stop the Tax Hike Amendment warns that a tax increase could result in entrepreneurs and businesses relocating to other lower tax states. In addition, they say, Massachusetts currently has a large budget surplus, and there is no guarantee that the funds collected will actually be spent on roads and education. They point to a clause in the amendment that reads “subject to appropriation,” noting that this language would allow politicians to “legally use the appropriations process to divert existing dollars away from education and transportation - and use them for pet projects - while funding for education and transportation could remain the same or even decrease.”

Fair Share Massachusetts disagrees, writing that the money raised is “constitutionally guaranteed to go toward transportation and public education,” allowing only the extremely wealthy to pay for opportunities that will serve the entire community and “rebuild a Massachusetts economy that’s stronger than ever.”

According to the Executive Office of Administration and Finance, passage of Question One may initially increase annual state revenue by $1.2 billion. However, the office cautions that there are a number of potential variations that could affect revenue from year to year. For example, “taxpayers may decide to relocate their home or business to another state or adjust their filing status or timing of income realization to minimize their tax burden.”

A detailed analysis from the Tufts University Center for State Policy Analysis is available here.

How Question One Will Appear on the Ballot

Here is the full text of the constitutional amendment that will appear as Question One on the November 8, 2022 ballot:

To provide the resources for quality public education and affordable public colleges and universities, and for the repair and maintenance of roads, bridges and public transportation, all revenues received in accordance with this paragraph shall be expended, subject to appropriation, only for these purposes. In addition to the taxes on income otherwise authorized under this Article, there shall be an additional tax of 4 percent on that portion of annual taxable income in excess of $1,000,000 (one million dollars) reported on any return related to those taxes. To ensure that this additional tax continues to apply only to the commonwealth’s highest income taxpayers, this $1,000,000 (one million dollars) income level shall be adjusted annually to reflect any increases in the cost of living by the same method used for federal income tax brackets. This paragraph shall apply to all tax years beginning on or after January 1, 2023.

How Will You Vote?

Better reporting would have…

Better reporting would have made the following points:
1. The current MA budget surplus for FY2022 is $1.9 billion, or more than 50% more than the revenues initially projected from the amendment. https://www.mass.gov/.../state-budget-officials-announce...
2. "Coming out of COVID," state tax revenues are $6.7 billion more than were projected at the time of budgeting (same).
3. The state "rainy day fund" (Stabilization Fund) currently has a positive balance of $6.9 billion, or almost 6 years of projected revenues from the amendment (same).
4. The state still has not spent $2.3 billion that it received in COVID relief funds (same).
5. The amendment is strongly supported by MA and national teachers unions. https://ballotpedia.org/Massachusetts_Question_1,_Tax_on...
6. MA spends over $17,000 per pupil per year, 5th highest among US states and almost 50% more than the median state. https://worldpopulationreview.com/.../per-pupil-spending...
7. The amendment is not a transitional surcharge to finance a (nonexistent) shortfall, but a permanent addition to the state tax burden that would continue to be collected, even in "better times."