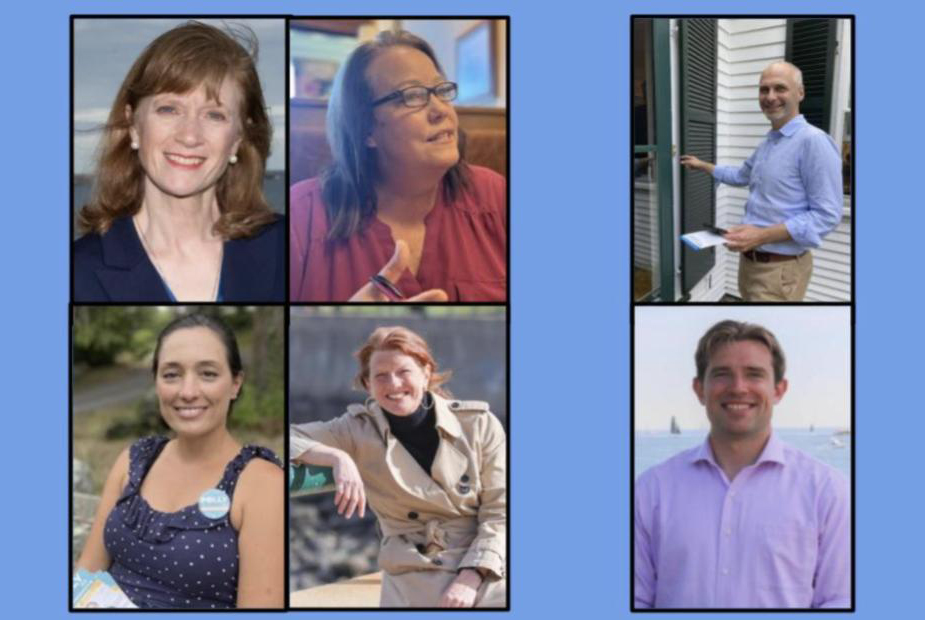 Editor's Note: Marblehead Beacon received a press release from the Tristan Smith campaign at 5:06 P.M. on August 29, 2022 in response to the joint release sent by Polly Titcomb, Terri Tauro, Diann Slavit Balyis, and Jenny Armini. He expressed, in part, that he is "incredibly proud of the campaign we have run" and "honored by the broad-based and diverse support and endorsements I have earned from local leaders." His campaign spokesperson said that the campaign had sent the release earlier in the day to Marblehead Beacon but we did not receive anything until a text communication at 4:30 PM from the campaign followed by Smith's release at 5:06 PM.

Earlier this morning, the campaigns of the four women in the race for the 8th Essex District State Representative seat–Polly Titcomb, Terri Tauro, Diann Slavit Baylis, and Jenny Armini–jointly issued a press release authored by Titcomb. In it, the four candidates announce their collective disappointment in Senator Ed Markey’s endorsement of Swampscott candidate Tristan Smith, 26. “The source of our disappointment,” they say, “is not the potential impact this endorsement will have on our candidacies, but rather what it says about the state of our political system and the structural deficiencies in our electoral process.”

The release points out that the sitting Senator’s endorsement of Smith was the latest in a string of such endorsements from public figures like former Congressmen John Tierney and Barney Frank, former Mayor of Lynn and state senator Tom McGee, and Buzzy Barton, Lynn City Councilor-At-Large and City Council Vice President–endorsements that, the women contend, are reflective of “generational loyalty” to Smith’s father–James Smith–a former politician and longtime partner/owner at the lobbying firm Smith, Costello & Crawford. Though the release does not reference it, Jackie Belf-Becker, Marblehead Select Board member, also endorsed Swampscott's Smith, which came as a surprise to some in light of the presence in the race of three candidates from Marblehead.

“There is no Republican opponent in this race,” the release goes on to say, “and the six Democratic candidates all share substantially overlapping priorities and progressive values. Under such circumstances, we cannot understand why such a high-ranking official would be compelled to influence such a unique and promising contest.”

In a separate piece addressing our coverage of the Smith campaign, we reported that last week we reached out to Senator Markey’s office to inquire about the unusual nature of a sitting senator making an endorsement in a six-way Democratic primary, particularly on behalf of the one candidate whose father he was connected with. The response we received from Markey’s office was limited to a link to a Tweet and a restatement of Markey’s endorsement of Smith.

The female candidates' joint press release noted that “FEC and OCPF public campaign finance data reveal that James Smith donated to the campaigns of all of the above-cited endorsers, some for decades. In certain cases, Smith’s partners at his lobbyist firm have similarly made personal contributions.”

While the statement makes clear that no suggestion is being made that anything occurred outside the bounds of campaign finance laws, it connects dots in the “long-standing professional relationship[s]” James Smith has with political insiders who endorsed his son.

The women go on to suggest that the Massachusetts Legislature is made up of “predominantly white men,” which is indicative of “pervasive cultural and discriminatory practices that have historically inhibited women and other marginalized groups from running for office.”

Candidate Doug Thompson does not escape unscathed in the statement. The personal loans and contributions he made to his campaign totaling $41,000, the women suggest, amount to more than some candidates have raised in total. “The democratic process is undermined every time an electoral race is influenced by power that has any connection to money because the vast majority of the population does not have such political connections or resources available to them,” the release adds. While the four who issued the statement have not self funded as much as Thompson's $41,000 or Smith's $14,200, two of the four have self funded to the tune of $5,000 or more a piece, with Titcomb having loaned and contributed $5,500 to her own campaign and Armini: $5,000. Tauro loaned her campaign $1,311 and  Slavit Baylis contributed only $30 to her own campaign.

When reached for comment on the press release, Doug Thompson stated, "I agree with my fellow candidates on many of these issues. I support public financing of campaigns, which would be the ultimate equalizer. Campaign finance reform and limiting the influence of special interests is extremely important." With respect to the "structural deficiencies" impacting women candidates alleged by the four candidates' press release, Thompson does not weigh in specifically, but points to an endorsement he received from 50 local women highlighting his strong commitment to women, particularly with respect to reproductive freedom. "Doug is the only candidate whose plan includes helping and working with other states," they say, speaking to abortion rights. "At the end of the day, we are one country. If any woman is denied abortion care that affects us all, even if she is not from Massachusetts.”

We spoke with Tristan Smith's campaign manager, Sophie Hauck, looking for comment for this story. She said that while the campaign would not be able to provide a comment by publication time, a statement would be forthcoming. We will update this story accordingly. (SEE UPDATE ABOVE)

We also reached out again to Senator Markey’s office for comment on this story and have not heard back as of publication time. Should his spokesperson respond, we will update this story.

Editor’s Note: The author of this story, Lena Robinson, and her family have been close to one of the candidates–Jenny Armini–and her family, for more than 25 years. Robinson’s husband, Dwight Robson, has donated to Armini's campaign. Marblehead Beacon co-founder Jenn Schaeffner is on the steering committee of the group PowerUP!, on which candidate Terri Tauro serves. Prior to launching Marblehead Beacon, Schaeffner contributed to Tauro's campaign.