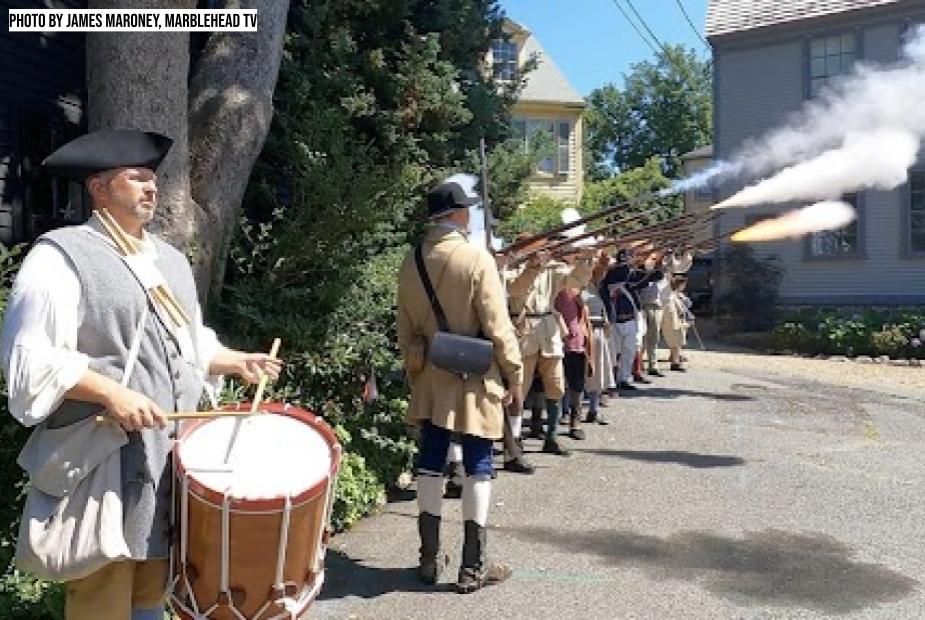 Update: August 31, 11:53 PM: After publication of this article, the author was contacted by someone who wishes to remain anonymous. Her quote has been added to this story.

Marblehead Community Charter Public School (MCCPS) has a long tradition of having Glover’s Marblehead Regiment (GMR) mark the first day of school. This year, MCCPS’s head of school, Dr. Peter Cohen, opted to skip this piece of the back-to-school welcome. Asked about the rationale for abandoning one of the school’s longest and most well-known traditions, he told Marblehead Beacon he’d decided to “go in a different direction this year and start new traditions.” After what he says was an internal discussion, he “thought the optics of the tradition with guns were not right,” adding that he believed it “was not a story.”

Reached for comment, Glover’s Marblehead Regiment Captain Seamus Daly spoke to Marblehead Beacon. He acknowledged that the annual appearance of the group had indeed been canceled, but did not wish to weigh in beyond saying “in deference to the head of school, you’ll have to ask him about that.”

Many in town did register their dissatisfaction with the elimination of the 26-year tradition at the school. “Whitewashing history,” “a cherished tradition,” “the town is losing its way”: These were some of the more than 150 comments a post on a Marblehead community Facebook page garnered yesterday.

Since its founding more than 25 years ago, Glover’s Marblehead Regiment has helped usher in the first day of school at MCCPS, says Bob Erbetta, longtime member of the group, and also one of the school’s founders and longtime (now former) employee. Every year, on the first day of school, parents, students, faculty, and personnel gather outside MCCPS, and Glover’s Regiment members–clad in re-enactment clothing–kick off a ceremony with the Pledge of the Allegiance and end it with the showmanship and historical significance of setting off muskets.

This year’s shift was met with displeasure beyond merely social media. A former MCCPS student who asked not to be named has brought lessons learned from the school to college. “I learned from my experience at Charter that material is best absorbed when it is brought to life, which is why the school emphasized project-based learning by having us make presentations three times a year at Exhibition,” he shares. “Glover’s Regiment teaches us about the most foundational era of American history in the most real-life way possible, so it’s a shame to see Charter dispatch this tradition that was part of my childhood.”

Parents of current students were similarly not pleased. “My husband and I arrived with our son for his first day at Charter,” says Sharman Pollender, an MCCPS parent. Her family was excited for the school’s annual tradition, and was shocked to learn it had been abandoned, particularly because “Marblehead prides itself on the part it played in 1776, and all our students should be exposed to it.” Pollender’s position is that virtually everything is offensive or can cause discomfort to someone, but that “if the history of Marblehead is bothering someone, they should opt out or not be part of the community.”

Bryan Ruocco, parent of two MCCPS graduates–one of whom is a member of Glover’s Marblehead Regiment (Andrew Ruocco)–was similarly disappointed. “[This tradition] allows our children to see, feel and hear our history…and ask questions regarding the Revolutionary War and the role that Marblehead played,” says Ruocco. A believer in making history come to life in order to teach it in an interactive way, Ruocco goes on to say, “[e]liminating this tradition has now pushed our town’s history aside to be forgotten about.”

UPDATE: Another parent of an MCCPS student spoke with Marblehead Beacon but wishes to remain anonymous. "While I appreciate the historic significance of the regiment and also the tradition connected to the Charter start of school, I ultimately found it unnerving to hear gunshots just outside a school building–especially on a day when other anxieties and stress are already running high," she says. "Regardless of whether the weapons or the people who wield them are where you place the blame for the spate of mass shootings, trauma can be triggered by just the sounds and smells of weapons firing," she adds, noting that "[t]he first grade students murdered in Newtown would be going into their junior year of high school this year and we haven’t come to a common sense solution regarding guns or mental health." She points out that "[i]f the people so amped up about this choose to redirect their energy off Facebook, arranging a walking field trip for the students to one of Marblehead’s many historically significant sites and seeing the shots fired there would be productive." Speaking of MCCPS specifically, she says, "I’ve never seen so much attention towards the Charter school and Dr Cohen, and he and the school offer a wealth more of good for the community that is being overshadowed by this uproar."

Glover’s Marblehead Regiment continues to be a well-known piece of the town’s interactive history that is on display throughout the year, particularly during Independence Day festivities. Its annual encampment at historical Fort Sewell is a highlight for residents of Marblehead and tourists alike.

Editor's Note: The author of this story, Lena Robinson, was on the Board of Trustees of MCCPS for three years before Dr. Cohen was the head of school. Robinson's two children attended MCCPS as well.

Additionally, Marblehead Beacon reached out to several local individuals connected with MCCPS to find those who might support of Dr. Cohen's decision but we were not successful in getting a comment. We will update this story with local voices should people step forward. Anyone who would like to speak with us may reach out at lena@marbleheadbeacon.com or 781-990-6566.