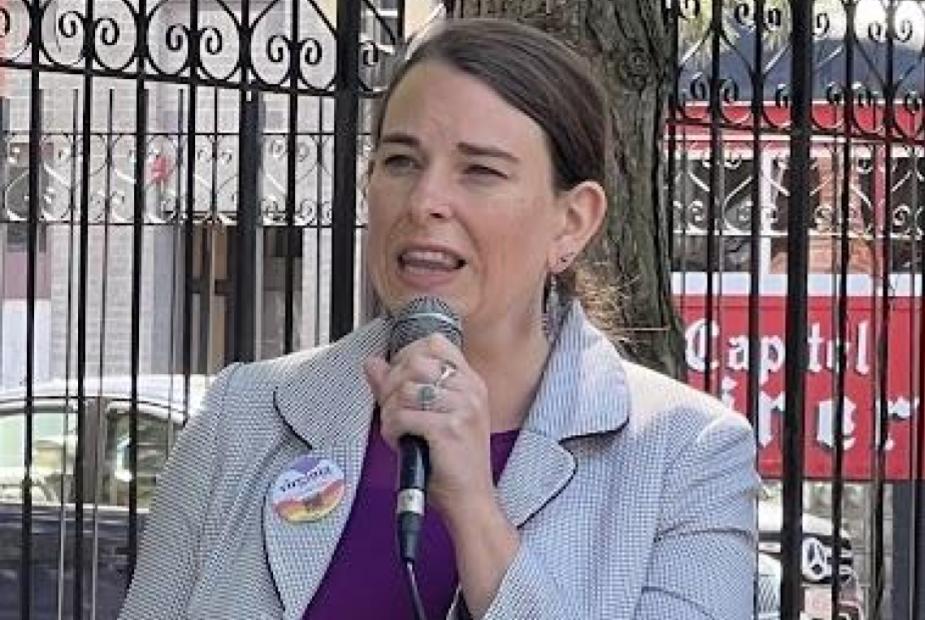 A New Sheriff In Town?

In our ongoing coverage of the 2022 state elections, Marblehead Beacon recently sat down with Essex County Sheriff candidate Virginia Leigh. Leigh, a resident of Lynn and single mom of two children, grew up on a farm in rural Pennsylvania. After graduating from Earlham College in Indiana, she went to work in El Paso, Texas on the Mexican side of the border, where she had the opportunity to learn Spanish and launch an education center for prisoners within the border-detention facility. She credits this experience–admittedly dangerous and intense–with setting her on a path toward helping people transform their lives. Since moving to Lynn, Leigh has served as Director of Training at the Lynn Community Health Center and has worked in school-based health centers and youth detention units. Since the pandemic, she has been in full-time private practice as a bi-lingual, bi-cultural licensed social worker.

In 2021, Leigh attended Emerge, the state Democratic party development program for women interested in running for office. The role of Sheriff was particularly attractive, as she was not interested in legislative work but wanted to continue in the human services and corrections field. According to Leigh, the job of the Sheriff is “to ensure the safety, treatment, rehabilitation, and ultimately the successful reentry of prisoners [in the Essex County Jail in Middleton] back to the community, and to provide the safe custody of prisoners not yet convicted but awaiting trial.”

“I cannot think of a more human-services job than to keep prisoners safe while they await their day in court and to…provide offenders with the right tools that they need and supports when they actually come back home,” said Leigh. Passionate when discussing her goals if elected, she speaks of ensuring the safety of all inmates and staff, safe custody and successful reentry of inmates, and the prevention of future victims.

Leigh is critical of the current administration in several areas. She points out the 47 percent recidivism rate of prisoners in Essex County and the lack of rehabilitation efforts in five of the past six past years. Noting that many of the rehabilitation, substance-use disorder prevention, educational, and vocational programs offered to inmates have been initiated this year, she wonders why “the current administration’s efforts have exponentially increased during the election season...but the recidivism rate is flatlined at 47%.” With more than one hundred programs offered by the jail, she says that the high recidivism rate suggests that many must be ineffectual. “Half of the people served by our jail were also failed by our jail.”

Leigh views jails as clinical treatment centers, with the Sheriff serving as Chief Rehabilitation Officer. Jails should be rehabilitating and preparing inmates to reenter society mentally, physically, and emotionally, Leigh explains, so that they do not reoffend. Ultimately this saves the taxpayers money.

Just because a policy is legal, Leigh notes, it isn’t necessarily ethical or right. In Essex County, for example, she sees clear problems with the inmate telephone communication system. Research shows that family connectedness directly equates to lower levels of recidivism, she contends. Yet the current telephone system charges excessive rates to inmates and their families, and the provider, Securas, pays what she calls a “kickback” of 35 percent to the jail.

The Sheriff’s office is not a law enforcement agency, and retribution should not play a role in its mission, Leigh continues. Rather, the role is the care, custody, treatment, and transportation of inmates, with the ultimate goal of returning them to society in better condition than when they arrived. This may include offering mental and physical health care and housing, educational, and vocational support. It is not about attending to local emergencies or running a regional dispatch call center, as she says is currently the practice in Essex county. “This is a human services job…. [A Sheriff] should stay in [his or her] lane; staff are corrections not law enforcement officers,” she says, and “the Sheriff can make law enforcement’s job easier by focusing on reducing recidivism.”

I am “not trying to change the jail into a treatment facility,” Leigh concludes. “I am simply acknowledging that is what it is. The job of the Sheriff is to remain unencumbered by…conflicts of interest so that their sole and singular focus is keeping the community safe–tending to the needs and mental health of prisoners and staff.”

EDITOR'S CORRECTION: An earlier version of this article incorrectly reported on employee contributions. Sheriff Coppinger has never and does not accept contributions from his employees.