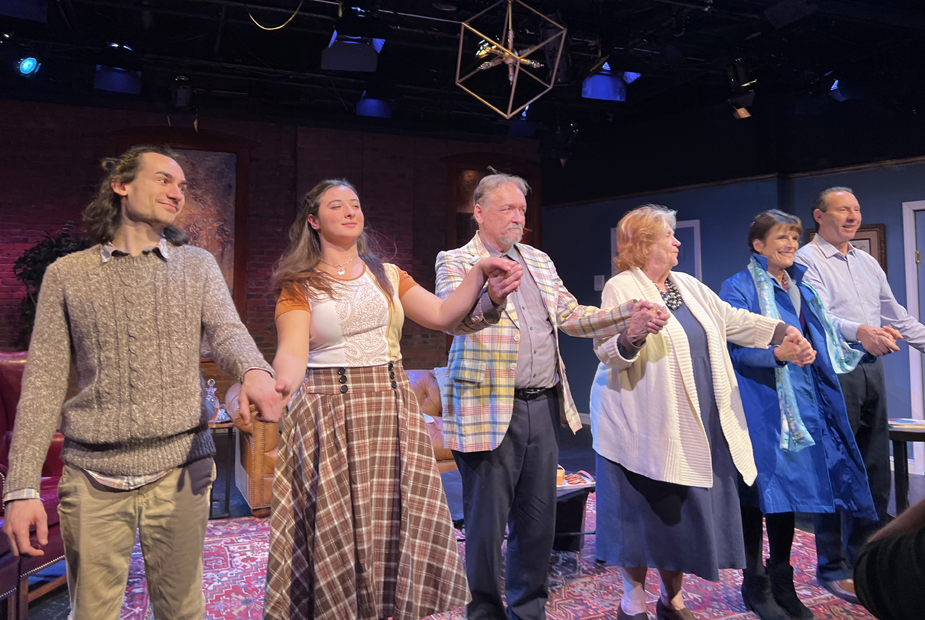 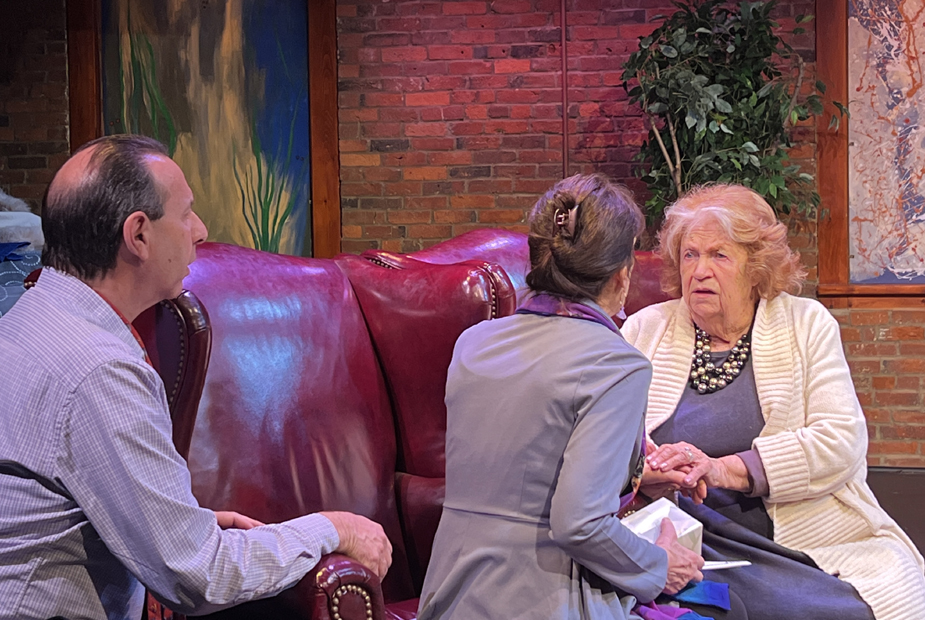 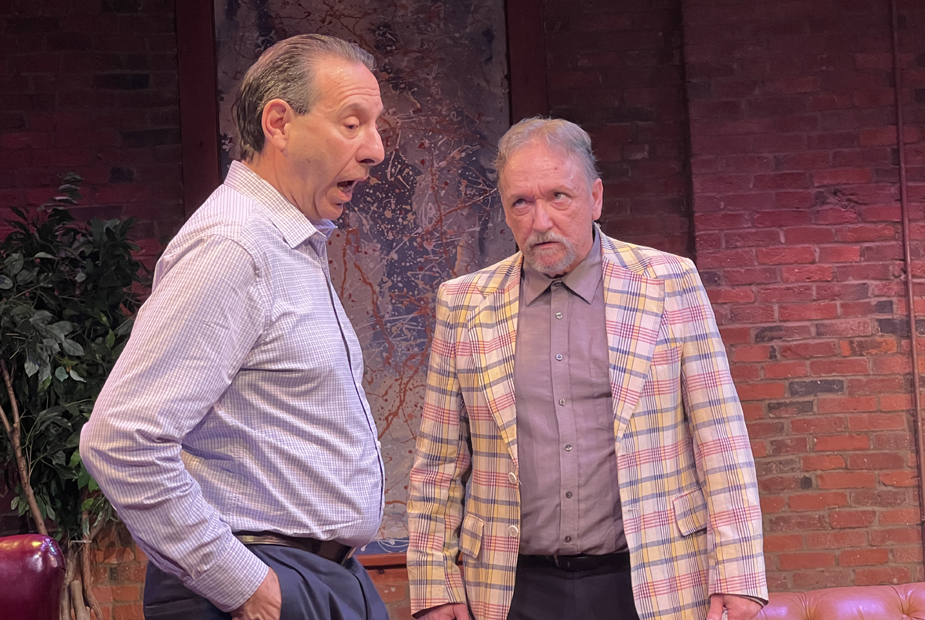 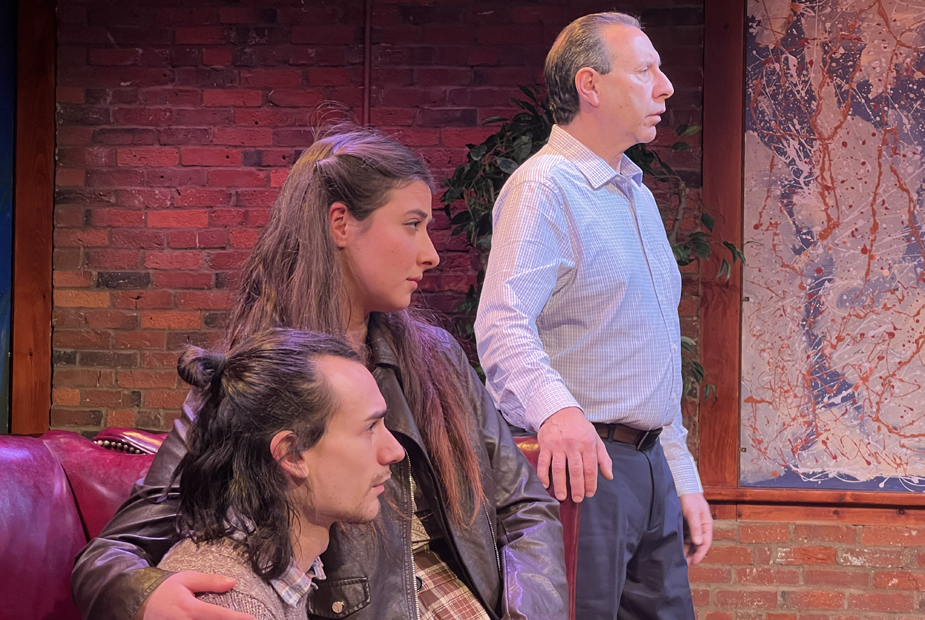 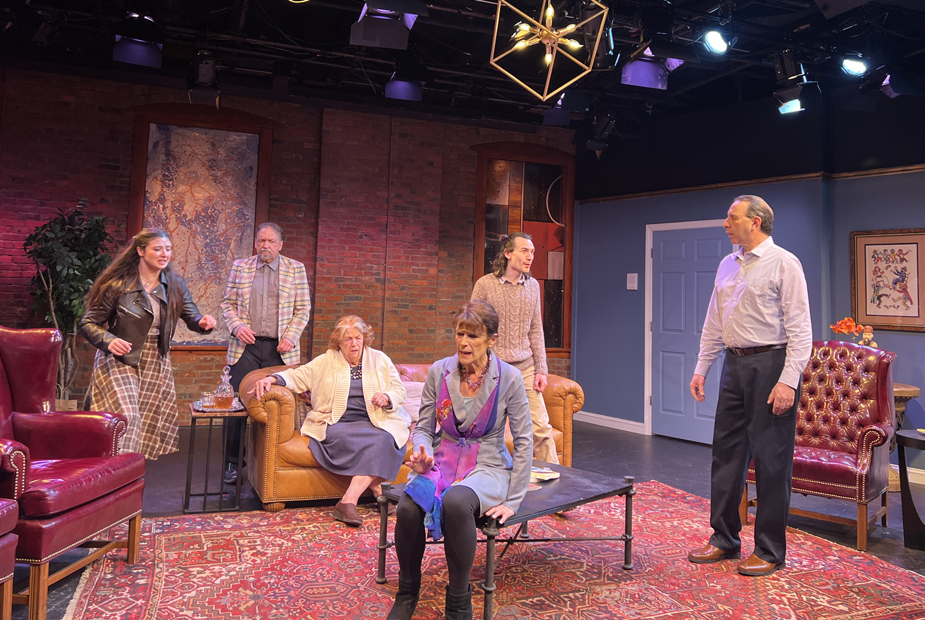 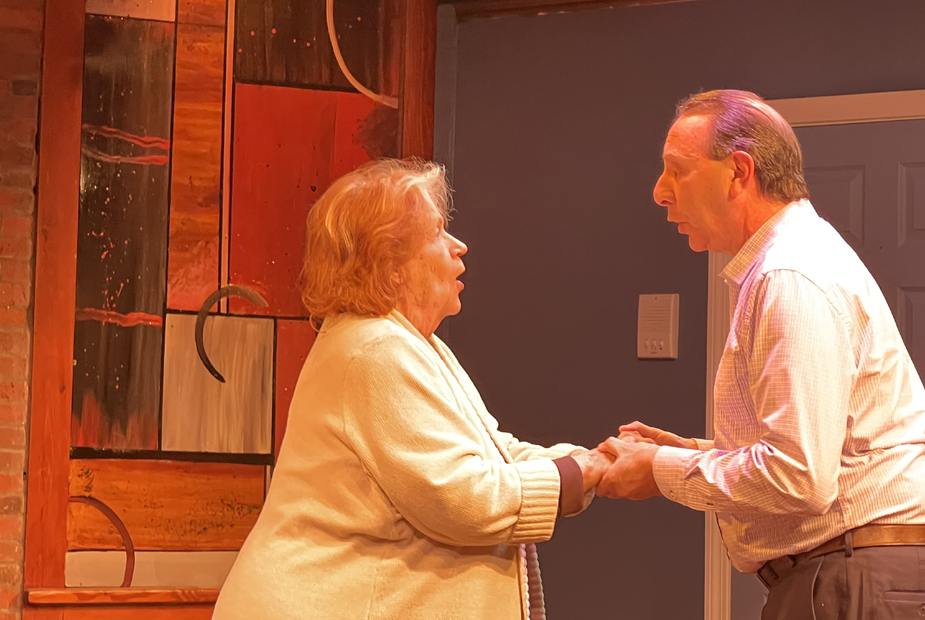 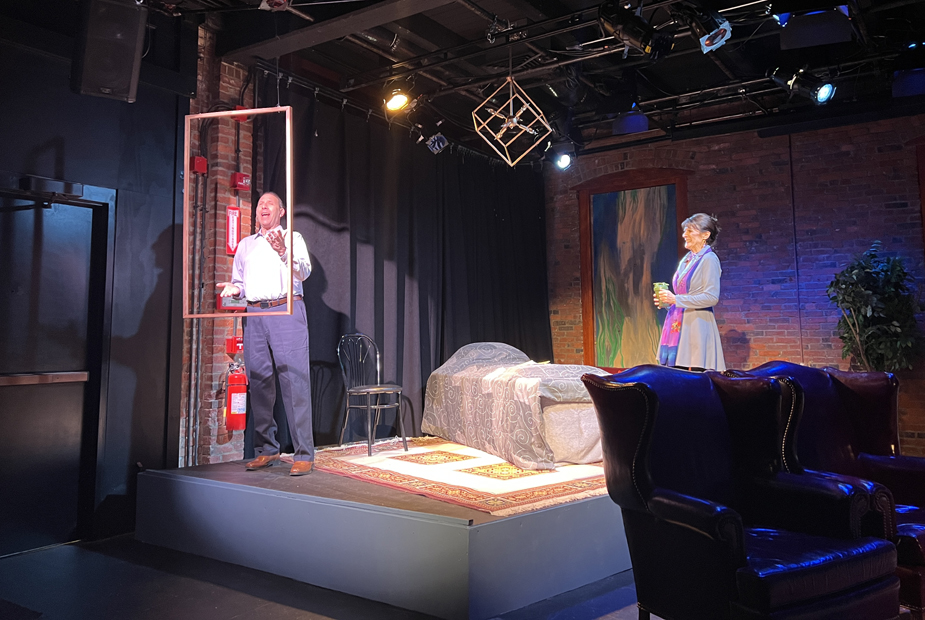 Marblehead Little Theater (MLT) is most certainly back in action. While there has been ongoing activity there for some time, theater in general and MLT specifically have suffered since the cascade of Covid’s negative implications rained down. Last night’s dress rehearsal for MLT’s Party? coupled with strong ticket sales for tonight’s opening and tomorrow evening’s show are indicators that MLT is ready to get fully back in the game, and people are ready to enjoy local theater again. (Tickets are still available for this weekend’s four shows and next weekend’s three.)

After a touching moment spent honoring MLT legends Ginny Morton and Henry Dembowski–both of whom passed away in 2022–the formal dress rehearsal performance of Party?, directed by Miriam Cyr, began. And the six cast members brought their A game. “They worked out the kinks and are now ready,” Producer Dayle Persons told Marblehead Beacon after the show. “I just loved watching them,” added playwright Anne Marilyn Lucas, speaking of the cast members.

The production is an original, and Lucas, who holds two master’s degrees and has been involved in the world of theater, television, and film since she was a child, wanted to run it in Marblehead first. “I’ve lived here since 1989,” she said, and she is closely connected with MLT. “I’ve had two off-Broadway shows,” she added, and already has dates and a theater in New York locked in for Party? in 2024. Lucas was pleased that she could see her first comedy performed in her town, and by such a talented cast, and is excited for what she hopes will be a good reception to the labor of love.

The play is both funny and sad, approaching the topic of marriage from wildly different perspectives. With the six cast members broken down into three couples representing three generations, the characters’ takeaways run the gamut from a marriage-is-permanent-no-matter-what view, to one in which marriage might involve multiple partners. The middle-aged couple Diana and Aaron, played by Sharon Mason and Ed Siegal, respectively, launch the show in a bedroom scene that captures the essence of their personalities. Aaron gazes at himself in a mirror chanting affirmations reminiscent of Stuart Smalley, while Diana lovingly looks to support his self-actualization journey.

From the extreme feminism represented by Caitlyn and her fiancé Jason, played by Victoria Berube and Michael Mazzone, respectively, to the perfectly delivered witty revelations from the elderly character Esther, played by the incomparable Bette Lautner, the views of marriage represented in Party? provide, essentially, a mirror to society. “The play is based on true events,” Lucas told Marblehead Beacon, with a little smile.

While the topic of marriage has been tackled from every conceivable angle in Hollywood and on stage, Lucas’s writing manages to bring a fresh take to the subject, and without the excessively trite wisdom offered by some performances. Siegal does an excellent job as Aaron–showcasing an over-indulged, over-mothered, unlikeable man-child looking for life’s answers from a self-help charlatan. And the long-suffering wife, Diana, is beautifully portrayed by Mason. Diana is a woman who has spent a lifetime putting her own needs aside to tend to a demanding, critical man.

Meanwhile, the young couple offers a more modern take on the institution of marriage–with some pieces arguably a bit too modern. Where the real nuance comes in, though, is with the elderly couple, whose characters are multi-dimensional, and not merely villains, good guys, or victims. Felix, played by James DeSantis, pairs perfectly with Lautner’s Esther, and the characters’ decades together include things playgoers may recognize as familiar when one partners with someone for many years. Some of the revelations about their marriage paint an unflattering picture, but because of the writing and acting, the characters remain highly likable in spite of–or perhaps because of–some of these warts.

Forgoing spoilers, one can say that the ending–while important–is not as important as the journey getting there. For those looking to catch a performance before it launches in New York, Party?–from start to finish–promises to keep your attention and make you reflect.