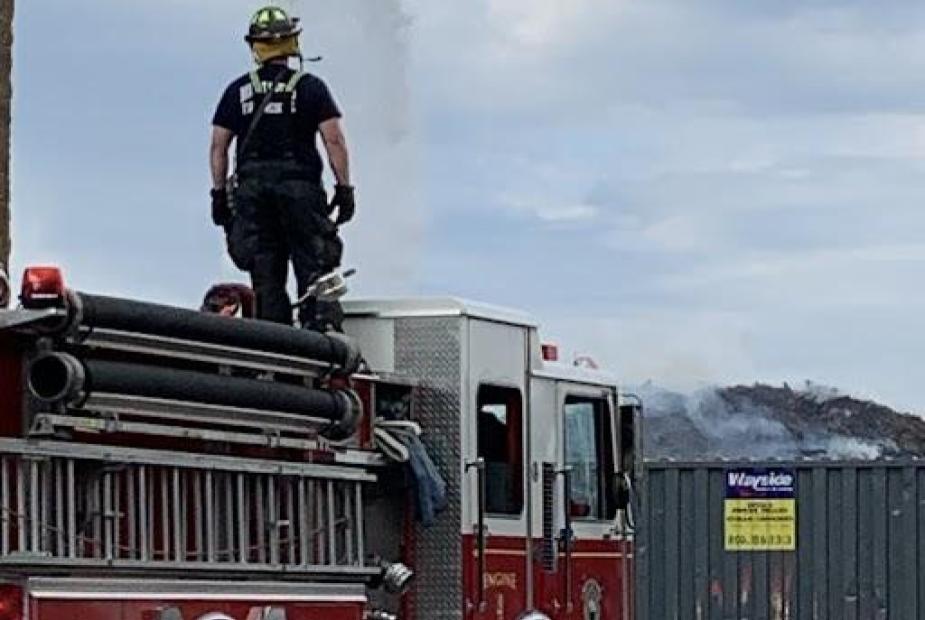 Following Monday’s fire at the Transfer Station, Marblehead Beacon caught up with Marblehead Fire Chief Jason Gilliland to discuss potential causes. Gilliland says that the Board of Health and the Transfer Station crew are very organized in the area that caught fire yesterday, and routinely keep separate piles of grass, brush and tree limbs, and logs and chips. Occasionally, he says, a heap will catch fire. Yesterday, however, all three piles caught fire. While he does not believe the fires to have been intentionally set, because of the three fires, the matter remains under investigation jointly with the Marblehead Police Department.

Yesterday’s fire in the compost area of the Transfer Station was initially reported in the late afternoon. The Marblehead Fire Department extinguished the fire with help from Peabody Fire. Initially, the Peabody support had come to Marblehead simply to cover the town stations but Chief Gilliland quickly realized he needed additional assistance on the scene. The Nahant and Swampscott Fire departments arrived to cover the Marblehead stations.

Once the fire was extinguished, several piles remained smoldering with “hot spots,” which were handled by Marblehead Fire during the overnight hours. When it was determined the fire was no longer a threat, Andrew Petty, Director of the Marblehead Board of Health, made the decision to bring in Mayer Tree Service (“Mayer”) to put the brush and clippings through a wood chipper. Mayer routinely does this work at the Transfer Station to keep the piles of clippings and compost separated and organized. Yesterday’s process involved hosing down the materials with a large machine and putting it in a grinder, after which town workers from the Department of Public Works removed compost material. This work began at 9:00 PM Monday and by approximately 2:00 AM the work had to stop when a belt on the large machine burned out due to the excessive heat conditions. Marblehead firefighters remained on site until approximately 5:00 AM today putting out several “hot spots.” Mayer Tree is continuing its grinding work today.

The yard waste area is still being cleaned up and will remain closed until completed, according to Chief Gilliland. The remaining areas of the Transfer Station are open for business. He also said there has been discussion about installing cameras at the Transfer Station which may happen, as there are no cameras currently.

Chief Gilliland pointed to the group effort of crews from both towns, saying everyone “did a really good job,” and emphasized that no one was injured. Marblehead Beacon also spoke to Marblehead Municipal Employees Union (“MMEU”) President Terri Tauro who confirmed that town workers from several departments worked overnight to aid in keeping the area safe after the fires were extinguished. Transfer Station workers themselves, however, received “no communication from the Board of Health overnight and reported to work this morning as usual.” She also focused on the importance of the fact that no member of the public or town workers were hurt during the blaze or clean-up. The MMEU does not represent firefighters from the Marblehead Fire Department.