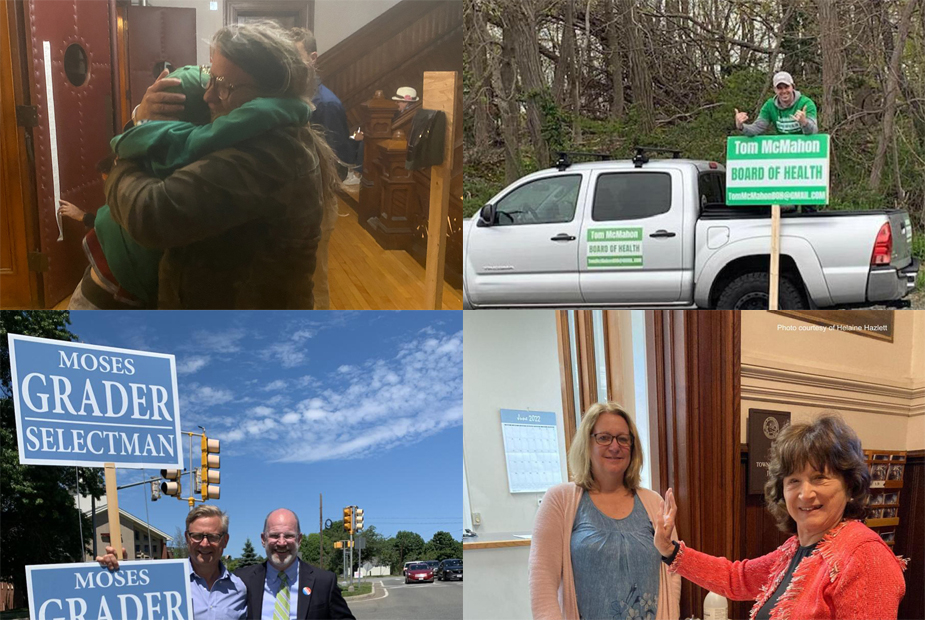 Contested Races a Done Deal With One Exception

(From L to R: Alison Taylor hugs her son after prevailing; Tom McMahon campaigns; Moses Grader and Jack Attridge stand out at Tent's Corner; Helaine Hazlett is sworn in)

Marblehead’s high-turnout election last week featured some surprises. Among them was the fact that voters who arrived at certain precincts Tuesday afternoon and evening were unable to vote with a standard ballot. The Town Clerk had run out of ballots, with several hours still remaining before polls closed. Photocopies eventually arrived and were ultimately used by voters to cast their ballots, though the photocopied versions were not readable by the voting machines and had to be hand counted, causing a significant delay in the posting of results.

Municipal Light: Not Yet a Sure Thing

Those who were expecting a clean sweep by incumbents were off by one: In an extremely tight race, Jean-Jacques Yarmoff ousted long-time incumbent Walter Homan from his spot on Marblehead’s Light Commission. Though Yarmoff has since been sworn in, it is unclear if that is where things end, as Homan, who lost by a mere 19 votes, tells Marblehead Beacon he is filing for a recount.

Board of Health: Hazlett Narrowly Holds Onto Her Seat

In a neck-and-neck race resolved only once the hand-counted photocopied ballots were tallied, Helaine Hazlett retained the seat she has held for nearly two decades on the Board of Health (“BOH”). Some, including Hazlett herself, believe that one particular ballot question drove the enormous turnout. “I think Question Two brought people out, whether in favor or not, and with that vote came thoughts on other candidates,” said Hazlett. Asked for her perspective on the campaign she ran, she said, “I had 54 people who signed up to hold signs for me on Election Day. Several of my grandchildren extended their stays at home in order to help me too.” She noted that her opponent, Tom McMahon, ran a “strong campaign,” but that she has the “experience needed.”

Asked about what she sees as the future of Marblehead’s Board of Health, Hazlett said that “emerging from the pandemic, the mental health of our community is number one.” She noted that she and the other Board of Health members will tackle the completion of the Transfer Station, work with the Marblehead Police Department and Schools on addressing the opioid problem, and coordinate with the Green Community Committee to focus on the goal of becoming carbon-free by 2040. “I’m not a single-issue person,” Hazlett said, and spoke about her past working in public health. “I’ve studied public health as a science and have spent my career trying to promote healthy behavior.” Hazlett was a strong proponent of the mask mandate in Marblehead last year and into this year.

McMahon, a first-time candidate for public office who lost by less than 150 votes, told Marblehead Beacon that while he was disappointed with the results and concerned about the issues that plagued voting, “I don’t think it would have changed my outcome.” McMahon wished Hazlett well, noting that it is clear to him from the engagement he saw that many care about Marblehead. “It’s a feeling that literally brought me to tears the next day when I reflected on it,” he said about the people around Marblehead who supported him in a variety of ways. McMahon’s hope is that as the Board of Health continues its work, the members “respect the businesses and never mute them again. They are the heartbeat of this town.”

The School Committee saw Sarah Fox hold on to her seat. She and the newest member of the Committee–Alison Taylor–were sworn in on Wednesday. Taylor beat Reece Dahlberg for the seat on the Committee that was open as a result of David Harris’ retirement. Fox took over the Chairperson role, and Taylor, as is common for new members, became the Committee’s Secretary. The first meeting with the new makeup of the Committee was tense at times, with some criticisms expressed during the public comment period.

Select Board: New Leadership and an Incumbent Clean Sweep

All five members of the Select Board were re-elected, with Jim Nye taking the lead in votes. Candidates James Full and Bret Murray unsuccessfully challenged the incumbents. The re-elected Select Board members were sworn in on Wednesday, in time for their evening meeting. At that meeting Chairperson Jackie Belf-Becker made a motion to have Moses Grader take over her role as Chair, which was unanimously approved.

In the race for Town Moderator, Jack Attridge is taking over the role long held by Gary Spiess.  “I am a stickler for details,” noted Attridge, who says he is excited to take on the duties. “I’ve studied Town Meeting in person for years, and now will be expanding my knowledge base in getting ready for the role.” Attridge has also learned quite a bit from his experience campaigning. “Having run for public office now, I have a deeper appreciation for what people who volunteer–and their families–give,” said Attridge. “I will never drive by Tent’s Corner and think of it the same way” he added, referencing the time he spent holding signs and the camaraderie he felt seeing so many candidates and their supporters. Attridge added that one of the core qualities that separates Marblehead from other municipalities with a mayor is that, “we have a process that really allows everyone to contribute. Here we have a Select Board and other roles in which impassioned people step up to serve as volunteers.” Asked what his thoughts are regarding the outcome of the election as a whole he said, “In the end, I believe voters always end up getting it right.”

With the exception of the coming Light Commission recount, the Marblehead town election is behind us. Coming up next is the fall election season, which will start with September’s primary races. Among those running will be the six Democrats vying to take over the seat vacated by former State Representative Lori Ehrlich. Three Marbleheaders–Jenny Armini, Diann Slavit Baylis, and Terri Tauro–are included in their number. Stay tuned for Marblehead Beacon coverage of that and the other statewide races with local impact.