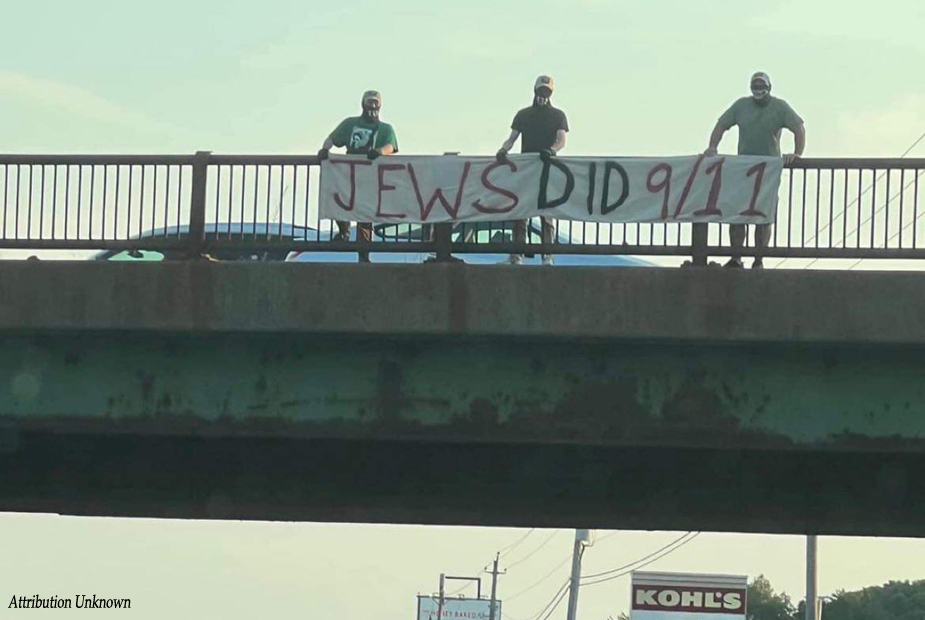 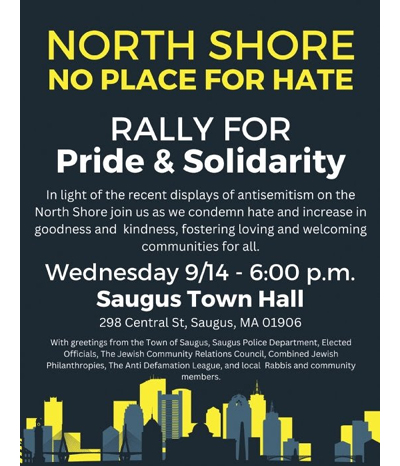 September 11, 2022 should have been a day to memorialize and honor the individuals who lost their lives 21 years ago in the deadliest terrorist attack to ever take place on American soil. Instead, members of a local anti-semitic group accused the Jewish community of orchestrating the terror and destruction of that day. In several North Shore locations, including over Route 1 in Saugus, a group of masked individuals hung a banner reading “Jews Did 9/11.”

In a statement, the Saugus Police Department acknowledged receiving multiple complaints about the banner, though they determined that the individuals displaying the sign were not breaking any laws. “While the First Amendment protects one’s legal right to free speech,” according to the statement, “the Saugus Police Department condemns the hateful messages displayed in our community and we condemn antisemitism and hate in all its forms.”

Saugus Police notified the Anti-Defamation League (ADL) of New England about the incident, and Robert Trestan, Regional Director, issued a statement that reads in part: “On September 11, a day when we remember a great tragedy experienced by our country and the loss of too many, a number of highway overpasses in our Commonwealth were tarnished with antisemitic banners, held by cowardly masked extremists, blaming these terrorist attacks on Jews. The scapegoating of the Jewish community is an age-old but exceedingly harmful antisemitic trope that must be called out and condemned whenever and wherever it occurs.”

Rabbi Yossi Lipsker, founder and regional director of Chabad of the North Shore, responded to the incident in a letter, stating, “We recognize that the single most powerful way to combat darkness is through an increase in light, an increase in pride, and an increase in acts of goodness and kindness.”

Together with local elected officials, members of the clergy, the Saugus Police Department, and representatives from Combined Jewish Philanthropies, the Jewish Community Relations Council, and the ADL, Rabbi Lipsker is planning a rally this evening, September 14, 2022, beginning at 6:00 PM in front of Saugus Town Hall, 298 Central Street, Saugus, in order to commit to “spreading acts of goodness and kindness to banish the darkness.” The community is invited and encouraged to attend.