Is Marblehead Taxpayer Money Under a Mattress?

Interest rates have risen exponentially in recent months. Just since early May 2022, the Federal Funds rate has increased from 0.65 percent to today’s 4.5 percent, which means that low-risk liquid investment vehicles like savings and money-market accounts as well as short-term United States Treasuries (“T-bills”) are offering higher rates that partially offset the inflationary bloodbath in which consumer prices have skyrocketed.

Unfortunately, it appears that the Town of Marblehead has failed to take advantage of these higher interest rates for the bulk of the money over which the Town has custody, including the proceeds of real estate taxes used to fund regular town operations (more than 100 million dollars annually) and the six million-plus dollars allotted to Marblehead through the federal government’s American Rescue Plan Act (ARPA).

Marblehead Beacon’s investigation into the management of the Town’s current financial holdings, with the goal of shedding light on our community’s resources, has met with a number of challenges and roadblocks. Inquiries have been sent to Town Administrator Thatcher Kezer under the state’s public records law, which essentially is the Massachusetts version of the more familiar federal Freedom of Information Act (FOIA). Apart from several exceptions that we have no reason to believe are applicable here, these statutes require public information to be provided within ten business days of the request being issued. Marblehead Beacon filed a request for information on the Town’s cash holdings, bank fees, and interest rates in early December 2022 (which followed more limited requests beginning last summer). Initially we received some partial and inconsistent answers, but for the past month have not been provided with the critical missing pieces and clarifications, despite repeated follow-up requests.

One Percent Interest on $29.3 Million

Despite these difficulties with obtaining information, Marblehead Beacon has been able to put together a partial snapshot of the Town’s cash holdings over the past half year. According to information provided by Kezer, as of December 6, 2022, a total of $29,300,882.31 was being held in 19 accounts at National Grand Bank (NGB). Located in Marblehead, the privately held NGB has long been a provider of financial services to the Town, and Marblehead Select Board member Jim Nye serves as the bank’s president. Kezer informed Marblehead Beacon that, as of December 6, all of the town’s cash was being held at NGB, where it was earning an interest rate of one percent. As part of this same response, Kezer indicated that NGB had been paying a lower interest rate–one quarter of a percent–in August of 2022, but he did not respond to a question regarding how much Town money was being held at NGB at that earlier date or when that rate had changed. It does appear that sometime after Marblehead Beacon’s initial inquiry related to interest rates, the rate went from 0.25 to one percent.

…When Four Percent Was Readily Available

The interest rates offered by NGB matter because significantly higher rates were available elsewhere during the same time period. Most municipalities in Massachusetts place resources with the state-chartered Massachusetts Municipal Depository Trust (MMDT). In mid August of 2022, when NGB was giving Marblehead a 0.25 percent interest rate, MMDT was paying 2.36 percent–roughly nine times as much. As reflected in the graph below, in December 2022–when NGB was offering one percent–dollars held with MMDT were earning 4.09 percent. As of today, MMDT’s seven-day yield sits at 4.55 percent, while NGB’s publicly advertised rate for money market accounts with more than $1,000,000 is 1.5 percent. According to Massachusetts law, municipal funds needed in the short term are not permitted to be invested in long-term or risky investment vehicles. But the MMDT is both a readily liquid and reliable option for municipal monies. 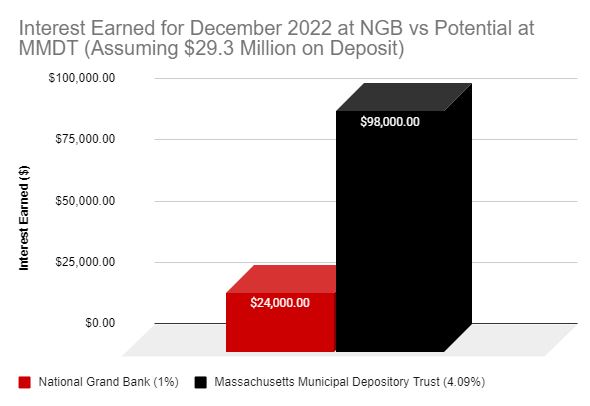 The town has also not responded to requests for information about applicable bank fees charged by NGB or any other institutions where funds may be held.

How Does Marblehead Compare to Other Municipalities?

Marblehead Beacon spoke with Attorney Ron Mendes, the Treasurer/Collector for Newton, Massachusetts, in November 2022. With nearly five times Marblehead’s budget, Newton has significant cash holdings, and Mendes reports that almost all of his town’s cash is held at MMDT. The only exception is an account containing roughly $250,000 that is held at another institution. When asked about whether other towns invested their cash differently, Mendes replied, “I know of no municipality in Massachusetts that doesn’t have their money with MMDT.”

Edward Costello, Vice President at Federated Hermes–the investment arm of MMDT, told Marblehead Beacon that the public portfolios held at his institution total approximately $30 billion, of which a significant amount comes from the Commonwealth’s municipalities, and the rest from state agencies and entities. Costello would not confirm precisely how much municipal money is held at MMDT, but he did say that “just under 300” of the 351 municipalities in Massachusetts have an MMDT account. “Public entities use [the cash] for their liquidity needs,” Costello said, noting that at any given time, an account may not have cash in it, as “cash is coming in and coming out.” Costello said he was unable to comment on specific accounts, including any held by Marblehead, but he did stress that “whether you have $1,000 or a billion, you’re getting the same yield,” which is something MMDT can do, in part, because of the size of its pool. This competitive portfolio return is likely the reason that so many municipalities utilize MMDT for cash holdings.

Even if MMDT is taken out of consideration, a quick online search for interest rates offered on savings and money-market accounts–including at both online and brick-and-mortar banks–demonstrates that rates above three percent are readily available, which is significantly higher interest than the one percent paid to the Town of Marblehead for funds held at NGB as of December 6, 2022.

All of this brings to light a number of issues facing Marblehead going forward. The first is a concern with transparency and timely responses to public record requests. Marblehead Beacon sent the town administrator’s office a number of reminders and also delayed publication of this story in order to allow time for a response to our inquiries. We never received any communication suggesting that our questions were causing an undue burden or that the information we were seeking is exempt from public records requirements. A response to reasonable requests is required within ten business days, and that deadline passed more than a month ago. This lack of responsiveness is particularly challenging given the rapidly approaching possibility of tax increases in town.

Just this month, Kezer communicated several talking points to another news outlet–the Marblehead Current–stating that his “goal is to make the municipal government look really boring,” a goal he has “because when it’s boring it means we’re wholly focused on getting the work of the town done.” He further stated that there would likely be a need for tax increases in the near term, stating that “[w]e will have to make a choice to either cut things from the budget or ask for the difference through a [general] override.” The “override” mentioned refers to an override of Proposition 2½, which involves a town-wide vote and is required before Marblehead can impose a permanent tax increase above 2.5 percent.

In addition to the transparency concerns, there remains some real uncertainty about what exactly is going on with Marblehead’s cash resources. Some of the information we have received has been conflicting or opaque. In December 2022, Marblehead Beacon asked Kezer, “How much of Marblehead's funds (including American Rescue Plan Act (ARPA) monies), if at all, are invested with Massachusetts Municipal Depository Trust (MMDT)?” Kezer responded, “Not applicable–funds went into the NGB general fund.” However, in a July 2022 email, Kezer had written that, “The town currently has funds at a multitude of banks,” including “National Grand, East Boston (now Rockland), Eastern, Peoples United (now TD), MMDT, Unibank, Lending Club, Newburyport Savings, and Bartholomew.”

This information about numerous different bank accounts aligns with an analysis done by  accounting firm Clifton Allen Larsen in 2021–which Marblehead Beacon reported on previously–with the resulting report noting, in part, that the town has 150 accounts. The report also stated that “the Town has bank accounts with one bank [where]...some Town employees will call the bank directly asking for current bank balances or whether a check has gone out, and the bank will supply them with the answer.” The report added that, “[t]his is an internal control issue, as only authorized signers on these accounts should have access and be provided such information.”

Kezer told Marblehead Beacon as recently as July 2022 that “Bartholomew has absorbed approx[imately] 75 of the 100 separate accounts that were held in MMDT under a separate account with sub-accounts–so the 150 has been cut in half, with an eye toward more consolidation as appropriate.” This statement is difficult to reconcile with Kezer’s later claims that all of Marblehead Town funds were being held in a general fund at NGB where they were earning an interest rate of one percent, and that no accounts had been moved from one location to another between May and December 2022.

While particulars of how each city or town opts to manage its funds are within the discretion of the relevant individuals or boards, there are some rudimentary laws that govern in this arena, including an obligation to make decisions based on standard fiduciary expectations and best practices in the field. Kezer told Marblehead Beacon that he references Chapter 11 of the Massachusetts Treasurer’s Association manual for guidance. (Chapter 11 begins on page 190.)

In the absence of complete and accurate information, it is impossible to tell for certain whether Marblehead has been handling taxpayer money appropriately. But the currently available data suggest that hundreds of thousands of dollars may have been forfeited due to suboptimal financial management. A definitive conclusion cannot be reached without full responses to a number of overdue public records requests. Marblehead Beacon is filing notice with the Secretary of State regarding the lack of mandatory responses and will update this story as it unfolds.

Editor's Note: Both authors of this article are account holders at National Grand Bank.