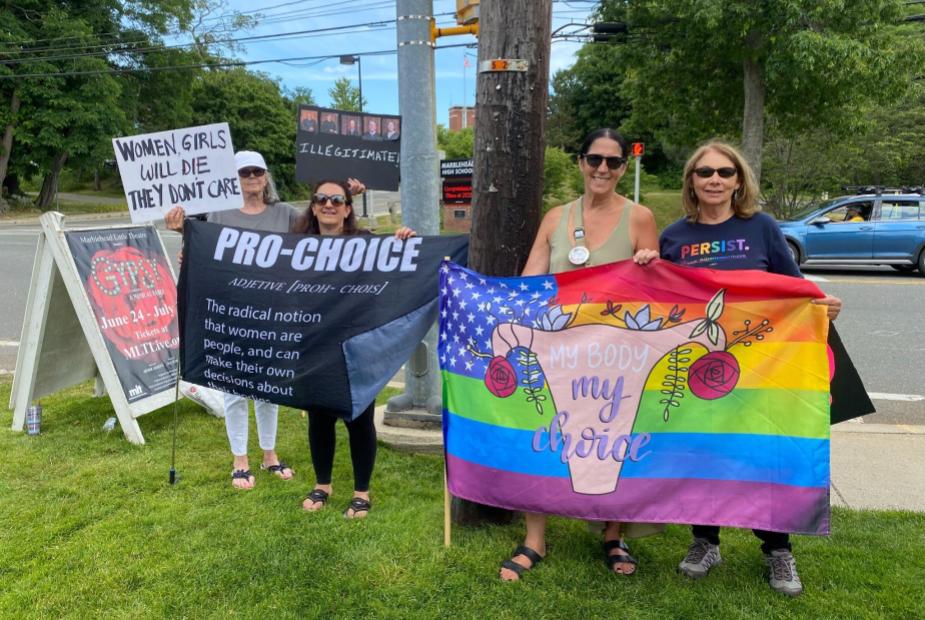 After almost 50 years of women having the right to access abortion in any state, the Supreme Court of the United States (“SCOTUS”) overturned the existing precedent–Roe v. Wade–earlier today. In the landmark Dobbs v. Jackson Women's Health Organization ruling, SCOTUS changed the landscape of abortion to something that will be legislated state by state. In response to the decision written by Justice Samuel Alito, protests broke out across the country, and several Marblehead citizens also gathered to make their opinions known. Outside Marblehead’s Community Center, Town residents stood and held signs. Marblehead Beacon spoke with some of the local protesters, including Lisa Hoguet. She said she hoped to bring awareness to the Town of Marblehead–to inform as many people as possible where things stand in terms of abortion rights in our country. She also said that she hopes to inspire more people to fight for change. Hoguet feels very lucky to live in Massachusetts, she added, because of its willingness to support abortion rights. She worries, though, about the status of these rights in other states.

Hoguet’s daughter is attending a college in a state that is likely to limit abortion access, she said, and she is concerned about the effect that transitioning from such a lenient state to a strict one may have. The overturning is “horrifying and archaic,” she said, and she would have liked to see the national codifying of Roe v. Wade.

Kathy Hempel stood outside the Community Center protesting the Supreme Court decision today as well. Hempel, the chair of the Marblehead Democratic Town Committee, spoke to the actions individuals can take to inspire change. The best way, she said, that any individual who supports abortion rights can make his or her voice heard is through electing pro-choice politicians who will fight for abortion access. Hempel also spoke to the separation of church and state, an idea that she believes is being eroded through the overturning of Roe v. Wade.

Ginny O’Brien spoke to Marblehead Beacon as well. Having had an illegal abortion herself in 1970, three years before the Supreme Court ruled in favor of Jane Roe, O’Brien is a fierce advocate for abortion rights. She always felt she was “keeping a secret,” and lamented that there will now be a return to such days, calling today “devastating.” She added that she finds it hard to believe that people will again have to “break the law to fight for their bodily autonomy” as she did.

As things stand after today’s ruling, any states that elect to do so may legislatively ban abortion prior to viability of the unborn or post viability. Before today’s decision overturned Roe v. Wade, under the law states were able to craft limited legislative restrictions on abortion, but no state could make abortion illegal altogether.