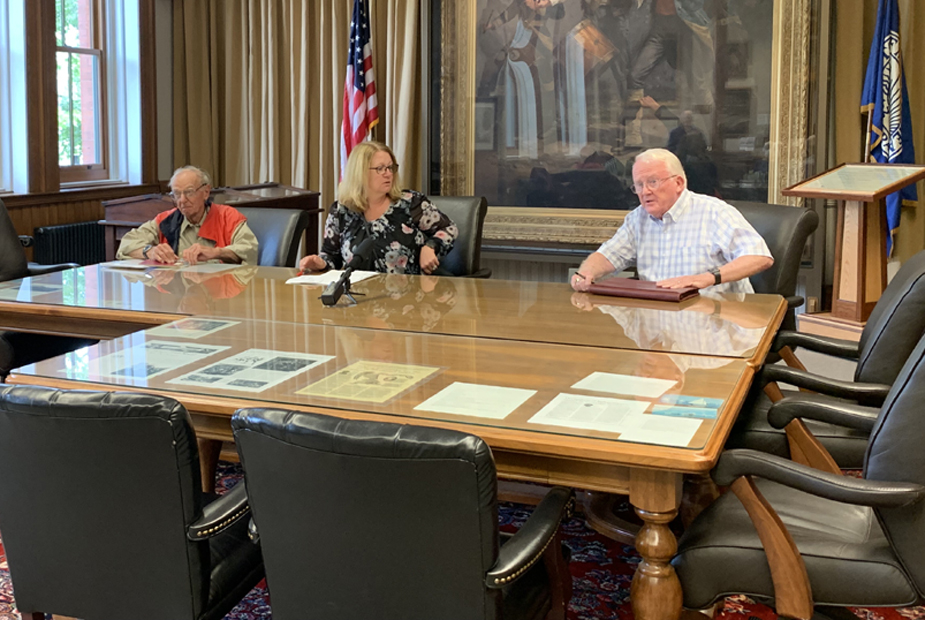 Image Above (from left to right): Marblehead Board of Registrars Members Anthony Chamay, Robin Michaud, and Walter Horan

This morning, the Board of Registrars (“Registrars”) held a meeting to review the petition for recount filed by Walter Homan, a candidate for Light Commission who lost by 19 votes earlier this month. There are four Registrars in Marblehead: Robin Michaud, who is the Town Clerk, Walter Horan, Tim Swigor, and Anthony Chamay. A quorum requires three of the four be present, and because Swigor was on vacation, the remaining three met to certify the recount petition.

In order to have his petition approved and a recount scheduled, Homan was required to produce ten signatures from each of Marblehead’s six precincts, and all signatures had to be validated by the Registrars. “My staff had already looked at each signature and even with the ones that were questionable, he had enough,” said Michaud, but they had to be officially approved by the Registrars at today’s meeting.

In order to be certified, a minimum of one signature from each precinct must be notarized. Michaud mentioned that one of the notarized signatures was mistakenly dated on June 29, 2022 even though it had been submitted on June 28. Audience member Kurt James questioned the validity of this notarization given the incorrect date and asked about the procedure for challenging the certification. Michaud replied that she would consult with town counsel. Marblehead Beacon will report as more information becomes available.

The three registrars went on to approve Homan’s petition, and a recount will be held on Monday, July 11 at 9AM at the Marblehead High School library.

According to Town law, the entire process from Election Day until a recount must fall within a very short timeline. Accordingly, Homan had until last Friday to submit his recount signatures; the Registrars had until today to certify them; and the recount had to be scheduled for no later than Monday, July 11, according to Michaud. “We are required to give each candidate three days’ notice,” which effectively means that the last possible day will be the actual day of the recount.

Marblehead’s local election last month saw just under 6,000 residents vote, and there were insufficient numbers of ballots available for voters. Photocopies were made, which resulted in significant delays across precincts and a hand count of the copies. The Light Commission race was the closest, with incumbent Walter Homan losing to Jean-Jacques Yarmoff by just 19 votes.

At the recount, each candidate will be permitted to have an observer of his choosing, while Michaud and other clerks to whom she has reached out will conduct the recount. Marblehead Beacon will cover next week’s recount.