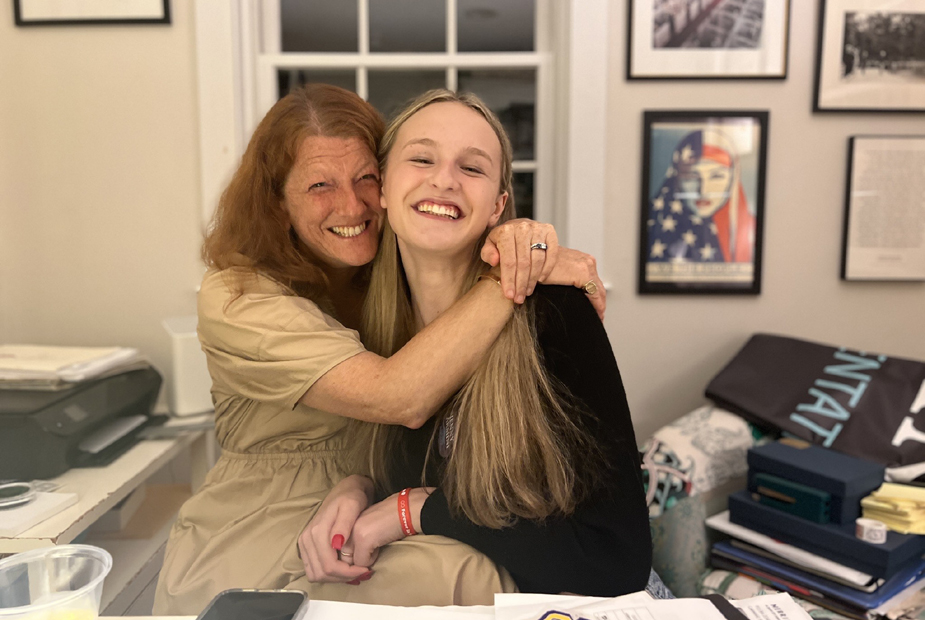 Champagne for Armini, Meltdown for Smith

The sounds of champagne corks popping, cheers, and laughter could be heard outside Jenny Armini’s home last night as she and her supporters saw results rolling in. Marblehead Beacon announced her projected win and accompanying data points within approximately one hour of polls closing, ending what had been a nail-biter of a six-way race for the 8th Essex District state representative seat. “The campaign has been the honor of a lifetime,” Armini told Marblehead Beacon. “I look forward to working hard every day for the people of Marblehead, Swampscott, and Lynn.”

All candidates called Armini with warm congratulations on her win, with the exception of Smith, who called her to say that he was not conceding until the official tally is in. The unofficial vote count has Armini leading by a comfortable margin of 320 votes.

What involved neither cheer nor champagne, however, was the scene that played out at candidate Tristan Smith’s Humphrey Street headquarters when a Marblehead Beacon reporter arrived. The reporter had earlier this week sought and received permission from Smith’s campaign manager (via text) to come by and take photos and get comment from Smith about the race once polls closed. The other five campaigns also had invited Marblehead Beacon to visit their homes or party locations at the close of voting. The reporter had voluntarily offered to text before coming by but, as with all other candidate stops and given the fast pace of the evening, did not end up texting beforehand.

When our reporter arrived at Smith headquarters–where the door to Humphrey Street was propped open–at approximately 9:30 Tuesday night, Smith immediately began yelling at her. Those attending his party fell silent as he screamed that Marblehead Beacon had “biased coverage.” His father–Jim Smith–spoke briefly with our reporter, also mentioning "biased coverage," at which point a red-faced Tristan Smith got directly in our reporter's face, pointed at the door, and yelled, “there’s the door; now get out." Our reporter left immediately.

Though neither Tristan Smith nor Jim Smith elaborated on what they were referring to with respect to bias in Marblehead Beacon’s coverage, it is a complaint his campaign also leveled earlier, as we covered here last week. Our coverage of each candidate may be found by searching his or her name on our website, and readers may assess whether our coverage has reflected bias. Additionally, in editors’ notes associated with each article, we specify prior relationships and potential conflicts. We also invite feedback and immediately update articles if any of our facts prove to be incorrect upon scrutiny.

From profiles of each candidate including Smith to in-depth assessments of each campaign’s financial standing to an unprecedented letter signed by the four female contenders in the race about the curious case of Smith’s endorsements, to coverage of candidate forums and eight days of candidate Q&As, Marblehead Beacon has reported on multiple aspects of the 8th Essex race, some of them unfavorable to one or more candidates. We have invited and published every press release Smith (and all other candidates) sent to Marblehead Beacon, and asked for comment from Smith about every article that we’ve published relative to his campaign.

Our focus, as always, is on maintaining and enhancing our own credibility as a (new) news source, and we hope and expect readers to hold us accountable by examining our stories closely and weighing in should there be any indicators of bias. We welcome letters to the editor here or at info@marbleheadbeacon.com about our coverage and any other topic.

You asked Smith if his late aunt Deborah Walsh helped him receive one of his endorsements. I’m not sure how you could think you’d be wanted at his office after implying such a terrible thing. Tristan’s aunt passed away after a long battle with cancer in 2020. He has every right to not want you throwing a notepad in his face asking questions after a long night of a tight race. Give the man some space! You should be ashamed of yourselves.

Thank you for your comment. The passing of Tristan Smith's aunt, Deborah Smith Walsh, in 2020 was a tragedy and should never be used in any implicitly or explicitly negative context. Marblehead Beacon did not, in fact, ask about Smith's late aunt assisting with endorsements. In late July and early August, one of our reporters sat down with Tristan Smith (both meetings recorded with his permission). In the latter interview the topic of politics being a family pursuit came up, and our reporter asked him about the role his father and aunt (both former elected officials in Lynn) may have played in his decision to enter politics. No endorsements were discussed.